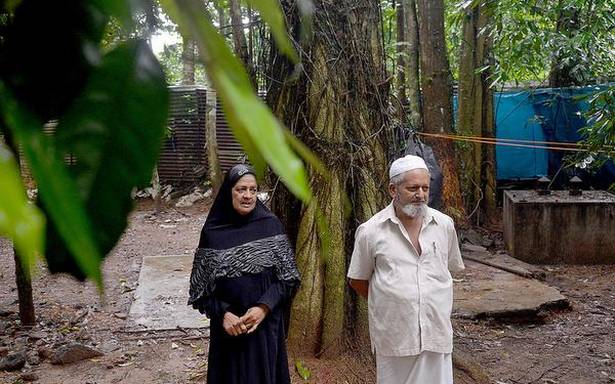 Assiya and Abubacker, an elderly Muslim couple, has been religiously guarding a nagathara and a sacred grove around it (Chenthara Sarppakkavu) at Vallam near Perumbavoor for more than 20 years.

The possession of the green patch, believed to have been there for more than 150 years, came to the couple when the ancestral property of Mr. Abubacker was partitioned. Since then, they have never stopped lighting a lamp there in the evenings and observing rituals associated with the nagathara, where a snake is revered as the deity.

“There are poojas on Ayilyam day, payasam is made on Thursdays and during other rituals. We have been holding all the rituals associated with the Sarppakavu without fail for the past two decades,” said Ms. Assiya.

This year, the Forest Department has reached out to the couple and offered them help to maintain the biodiversity of the spot through an incentive programme. Located in an area of five cents, the sacred grove supports a host of flora and fauna. The managers of the sacred grove will be provided a one-time incentive of ₹25,000.

The department has suggested bio-fencing around the sacred grove using henna plants and the deepening and de-silting of a pond located on the campus.

“Originally, the holding was owned by Sayed Muhamad, Mr. Abubecker’s grandfather. No tree has been cut down since the sacred grove reached us. We hope to plant more saplings in the kaavu and improve the greenery,” said Ms. Assiya.

The support from the Forest Department comes at a time when those guarding Santhivanam, a sacred grove at Paravur, are engaged in a pitched battle with the Kerala State Electricity Board (KSEB) to protect it. Opposing the KSEB’s decision, the campaigners for the grove said the board should have drawn the power lines through an alternative route, which would have reduced the loss of biodiversity.

The spread of invasive species was one of the threats faced by sacred groves, said P.K. Ramachandran, one of the trustees of Ponnakkudam Bhagavathy Devaswom Trust, which owns a sacred grove. Invasive plants such as mikania were fast covering the vegetation and even grew over the canopy of trees in sacred groves, he added.

The trust had been actively involved in the management of the sacred grove, which is spread over an area of four acres. The State government should come forward to support such trusts for developing nature study facility along with the sacred groves. The youth should be given opportunities to learn about nature and the need to conserve it, he said

An analysis of scared groves by officials of the department indicated that the maximum extent of most individual units were five cents. The owners of big units associated with temple trusts were not found keen on associating with the department for its conservation and protection.

In case of a large number of individual units, which approached the department for support, the request was for carrying out civil works such as construction of compound walls and retaining walls around trees. The applications for civil works would not be entertained as the focus of the scheme was on improving the biodiversity inputs of the groves, said M.A Anaz, the Assistant Conservator of Forests (Social Forestry). Support could be offered only for planting more trees and other bio-augmentation programmes, he added.