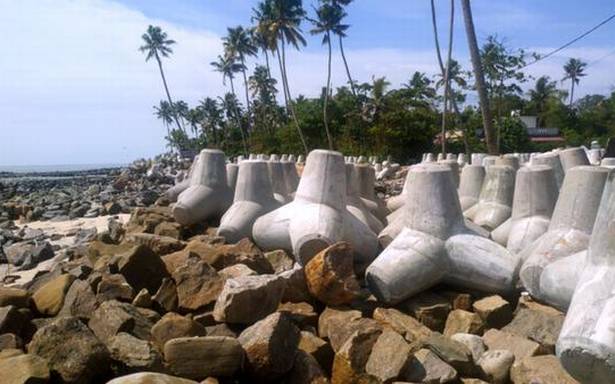 The construction of groyne fields (pulimuttu) in Kattoor is making good progress.

In a bid to tackle sea erosion, 34 breakwaters with a total length of 3.16 km are being built from Omanapuzha to Vazhakoottam pozhi.

Each groyne will have a length of 40 metres from shore into the sea and 20 metres width.

Tetrapods are used as an alternative for granite boulders, which were widely used for constructing breakwaters. However, an acute shortage of granite in the State forced the authorities to look for alternatives.

Officials said that tetrapods would minimise the use of granite in the construction of breakwaters.

The construction of the groyne fields, which began in October 2020, is expected to benefit 160 families directly and more than 600 families indirectly. Besides, around 20 hectare of land could be protected from coastal erosion.

The project being implemented at a cost of ₹49.90 crore is funded by the Kerala Infrastructure Investment Fund Board (KIIFB).

The State government last year decided to establish 114 groyne fields at five places off the Alappuzha coast at a cost of ₹184 crore under the KIIFB, after sea erosion became severe in coastal areas of the Alappuzha district, especially during the monsoon season.

The other four groyne fields will be built in Haripad, Ambalappuzha and Alappuzha Assembly constituencies.

The structures will directly benefit 625 families and between 1,500 and 2,000 families indirectly.