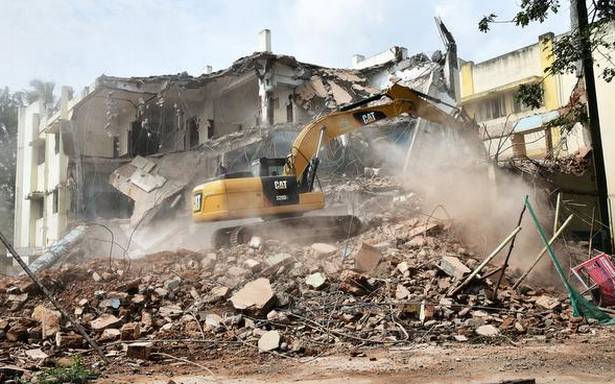 The proposed super-speciality block at the Coimbatore Medical College Hospital (CMCH) will be an eight-storey building (ground floor plus seven) spanning around 2.4 lakh sqft.

The groundbreaking ceremony for the new block, funded by Japan International Cooperation Agency (JICA), is expected soon as the Public Works Department is speeding up the demolition of four old buildings on the hospital campus.

Sources in the know of the works said the demolition of the four buildings – old mortuary, casualty ward, VD clinic and a three-storey building which housed various wards and Departments including Psychiatry and ENT – was expected to be completed by January 20.

“The proposed plan is to accommodate all super-speciality departments in the new building which will have modern infrastructure. The block will also have facilities including more operation theatres,” said CMCH Dean P. Kalidas.

Various departments and wards that were functioning in the old buildings were shifted to other buildings on the campus before demolition works started.

Municipal Administration Minister S.P. Velumani and Minister for Health and Family Welfare C. Vijayabaskar had recently said the super-speciality block would further strengthen the medical infrastructure in the government sector in Coimbatore district.