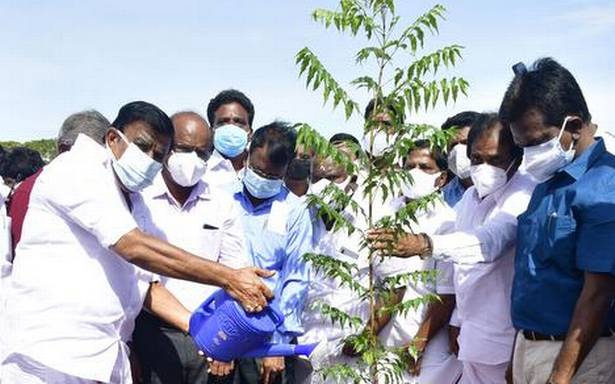 TIRUCHI: Joining hands with the Forest Department, the Tiruchi City Corporation on Sunday commenced a tree plantation drive in the city in commemoration of the birth anniversary of former Chief Minister M. Karunanidhi.

Minister for Municipal Administration K.N. Nehru flagged off the drive by planting a sapling in the presence of Collector S. Sivarasu, Corporation Commissioner S. Sivasubramaian and District Forest Officer Sujatha.

Mr. Nehru said that 25,000 saplings would be raised in the city in the first phase. They would be planted along the sides of Royal Road, Lawsons Road, Anna Nagar link Road, Sivaprakasam Road, Sashthri Road, Karur Bypass Road and up to Chathiram Bus Stand. The saplings would be protected with iron guards so as to safeguard them from wandering animals. The Corporation would water them regularly.

Mr. Nehru said that the tree plantation drive would increase the green cover and beautify the city. The authorities should ensure proper maintenance of the saplings. Saplings would be planted in other parts of the city also to the possible extent, he said.

Later, the Minister initiated the planting of one lakh saplings at Pallapuram near Lalgudi under the Miyawaki concept, a Japanese-promoted urban forestry initiative.

They will come up on eight acres of land. Twenty five types of species will be planted. The workers enlisted for Mahatma Gandhi National Rural Employment Guaranty Act would be involved in the drive, said S. Vaidhyanathan, Revenue Divisional Manager, Lalgudi.

The DRO said that the planting would be completed within five days. They would be watered under the drip irrigation method, he said.