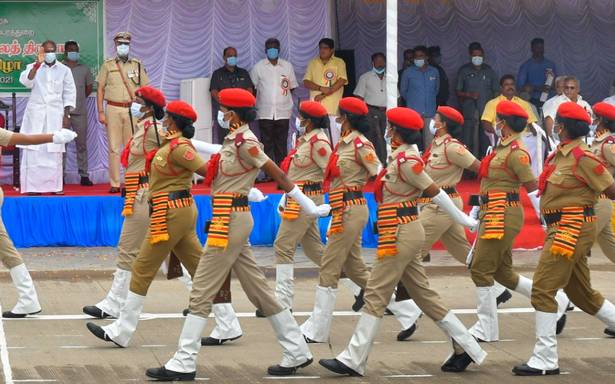 Delivering his address after hoisting the national tricolour to mark UT’s liberation from French rule, the Chief Minister said the decision to provide laptops was taken following the feedback about the difficulties faced by poor students to attend online class during the pandemic time.

Touching upon the complaints of damaged roads, the Chief Minister said after the withdrawal of North East monsoon, the government would take up repair of roads. In the first phase, ₹ 33 crore would be released from the constituency fund meant for legislators.

In order to tackle inundation, the government has taken up construction of culverts opposite Housing Board, Mettuvaikkal at Gundu Salai and NH road junction at Ellaipillaichavady and improvement of Uppar drain from Kamaraj Salai junction to Vanarapet. The construction of 220 dwelling units under the Smart City programme at Chinnayapuram was under progress.

On COVID-19 vaccination, the Chief Minister said 70% of the UT’s population have already been vaccinated. “Sufficient vaccines are available. Therefore, I appeal to those who have not been vaccinated to get the jabs without fear and hesitation,” he said. Mr Rangasamy also appealed the people to follow COVID-19 protocols during Deepavali festival.

Earlier, the Chief Minister was given a guard of honour by the territorial police. March past of various contingents of the police, fire service and NCC and cultural programmes were part of the celebrations. Similar celebrations were also held in the enclaves of Karaikal, Mahe and Yanam.

It was on November 1, 1954 that the French flag was lowered at the Governor’s building and the Indian national tricolour was hoisted at the sound of 21 gun salute.