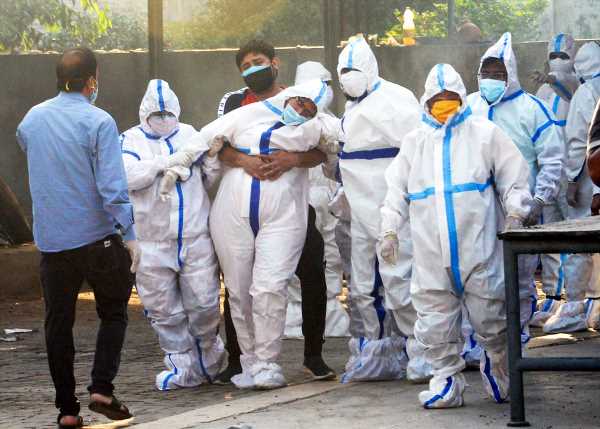 COVID-19 has not spared even a single family and still central government’s officers are living in “ivory towers” oblivious of ground realities, observed the Delhi high court which on Tuesday was of the view that manufacturing of Sputnik V vaccine in India is giving an opportunity to the nation staring at shortage of vaccines.

“God bless this country”, was another remark of a bench of Justices Manmohan and Navin Chawla which castigated the Centre for not being alive to the pandemic situation that is taking so many lives.

The bench said the collaboration of Panacea Biotec with Russian Direct Investment Fund for manufacturing of Sputnik V vaccine should be seen as an opportunity to ensure its usage here and in such matters instructions are to be taken from the highest authorities that too within 30 minutes.

It said “no one is applying its mind” when there is an opportunity for the government to get millions of vaccines and it should use this as a window.

“Otherwise, deaths will continue to happen. Every day you are castigated by each and every court and still you are not awake.

“Which bureaucrat is giving you instructions. Is he not alive to the situation? God bless this country. That is why we are facing this situation. In such matters instructions are to be taken from the highest authorities that too within 30 minutes,” the bench said.

It added, “Does your officer not see so many deaths are taking place in the country and we are short of vaccines. Your client is not alive to the situation.”

The bench, which was critical of the Centre’s stand on the issue, said “You (government) are so short of vaccines and you are not taking it through. May be it is an opportunity for you. Don’t be so negative. It is like a raging fire and nobody is bothered. You people don’t understand the larger picture or what.

“Tell your officers it is an opportunity for you, don’t lose it. No one is applying its mind. The virus has not spared any single family. Your officers are living in ivory towers,” the bench said.

The high court’s observations came while hearing a plea of Delhi-based Panacea Biotec seeking to modify a July 2020 order, by which the firm had undertaken not to prosecute further the execution proceedings instituted by them in relation to an arbitral award, running into crores of rupees, passed in its favour and against the Centre.

The company, in its fresh application, sought release of the arbitral award saying it needs funds at the earliest in the larger interest of humanity as it has already manufactured trial batches of COVID vaccine Sputnik V in collaboration with RDIF and the process of manufacturing scale-up batches is on.

The bench said “This court is of the view that in today’s time there is acute shortage of vaccines in India and the collaboration of applicant (Panacea Biotec) with RDIF gives India an opportunity to ensure that the vaccine manufactured by the applicant is used for sale in India.”

The court issued notice to the Centre and asked it to examine the plea and file a reply within a week and listed it for hearing on May 31.

The company, represented through senior advocate Sandeep Sethi, said, “If the awarded amount is not released…, the whole process of manufacture of vaccine at the fastest pace may get derailed and delayed which will not be in the larger interest of humanity.”

Additional Solicitor General Balbir Singh, representing the Centre, submitted that the manufacturing of Sputnik V will not benefit the country as it will be for global supply by RDIF.

He claimed that certain misleading statements were made in the plea and there was no urgency as the vaccines are to be sold outside India.

The Centre was also represented through advocates Rajesh Ranjan and B S Shukla.

Sethi, however, responded that no manufactured vaccines can be exported without the government’s consent.

He said these vaccines are meant only for Indian use and it will benefit the government as the firm is one of the largest manufacturers of vaccines which supplies domestic and international markets.

On the Centre’s objection to the plea, the bench said the government is short of vaccines and this company says they are willing to manufacture and deposit 20 per cent of sale proceeds in the court, so it should be taken as an opportunity.

The application was filed in a pending appeal of the Centre challenging a single judge’s order dismissing its petition on a limited point of limitation period.

Before the single judge, the Centre had challenged the arbitral tribunal’s award which was in the favour of Panacea Biotec and Bharat Biotech International Ltd and Serum Institute of India relating to an earlier agreement for pandemic H1N1 influenza vaccines in 2010.

In its plea before the division bench, Panacea Biotec mentioned that Serum Institute and Bharat Biotech are also exporting COVID-19 vaccines to various countries and now there is huge shortage of vaccines which is not readily available for citizens of the age of 18 years and above, though officially it has been declared that they are eligible for vaccination since May 1.

“It is one of the greatest challenge the humanity is facing which can only be overcome by vaccination and by following other protocols. Unless timely steps for manufacture of COVID-19 vaccine are taken, the death toll can go up to astronomical figures,” it said while maintaining that 100 million doses per year of Sputnik V vaccine for the global market would be manufactured.