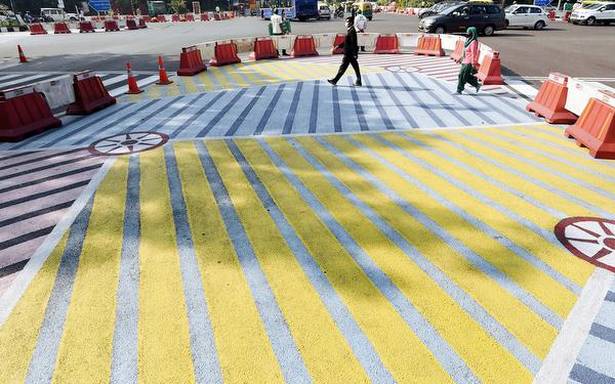 TU trials are temporary, quick and relatively low-cost interventions which test urban design, transportation planning and infrastructural changes aimed at improving road safety for all users, especially the most vulnerable among them — pedestrians, cyclists and other non-motorised transport users.

The Delhi Government has collaborated with SaveLIFE Foundation to work on road safety to make the city streets safer through such trials which will be conducted for two months.

As part of the Zero Fatality Corridor (ZFC) Project with the Delhi Transport Department, SaveLIFE Foundation tests temporary urban design interventions to improve safety for pedestrians, cyclists, and other road users starting this week. “The trials will see road space being redistributed to ensure modal equity, road geometries being modified, traffic being channelised, vehicular speeds being reduced, and pedestrian and cyclist safety infrastructure being added,” the Government said.

The Transport Department had earlier signed an MoU for the reduction of crashes at 13 intersections in Delhi.

“Through these tactical urbanism trials, earlier at Bhalswa Chowk and now at Rajghat, we aim to develop a comprehensive network of safe roads and junctions across the city,” Transport Minister Kailash Gahlot said.

Transport Commissioner Ashish Kundra said the objective of these trials is to insert safety elements for all road users.

Since 2016, the Rajghat intersection and Rajghat bus depot collectively witnessed 47 crashes, 13 fatalities and 51 injuries, he said.

“These trials are aimed at making the intersection safe for all in an inclusive, cheap and quick manner,” he added.

Piyush Tewari, SaveLIFE Foundation CEO, said, “Our zero-fatality corridor model extensively uses evidence to determine the best solution to save lives. At Rajghat, we have followed a six-point intervention strategy to redesign the junction.”

According to Mr. Tewari, all elements at Rajghat focus on either reducing the speed, or minimising conflict.