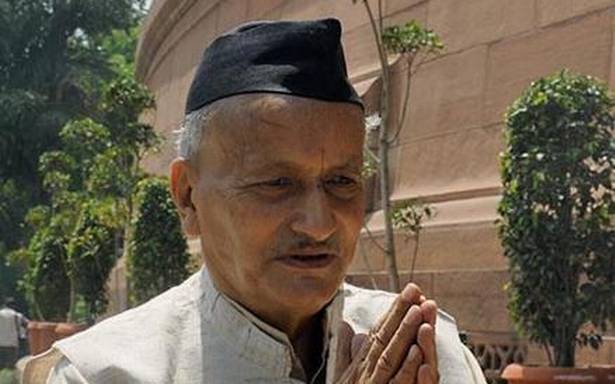 Koshyari is acting like a ‘political agent’ of the Central government, says editorial in party’s paper Saamana

Launching a broadside against Mr. Koshyari, the Sena’s mouthpiece Saamana alleged that the Governor’s behaviour was “unconstitutional” and that he was acting like a “political agent” of the Central government. However, the editorial said that the tripartite MVA coalition would not “surrender” to such behaviour “like former Afghanistan President Ashraf Ghani did to the Taliban”.

“It appears that the MLCs will not be appointed until the Governor’s ‘favourite government’ [the BJP] comes to power in Maharashtra,” read the editorial.

The MVA government had submitted a list of 12 members to be nominated to the Upper House of the State Legislature to the Governor on November 6, 2020 but Mr. Koshyari’s decision has since been hanging fire.

Alluding to the order passed by the Bombay High Court in the matter, the editorial said: “The High Court has said it is Mr. Koshyari’s duty to declare his decision on the nomination of 12 MLCs. But taking eight months to make a decision is an inordinate delay.”

The Sena mouthpiece said that if the Governor thus breached the Constitutional framework, he stood in danger of losing his dignity.

“His own people [the BJP in the Centre] are playing with his dignity… Mr. Koshyari’s behaviour as the Governor is unconstitutional and politically biased… There can be no change of guard [in Maharashtra] using the Raj Bhavan, and the MVA will not surrender like former Afghanistan president Ashraf Ghani,” said the editorial.

The editorial further said that Nationalist Congress Party (NCP) supremo Sharad Pawar, who recently met Mr. Koshyari at a flag-hoisting event, had asked the Governor regarding the delay in the appointments.

“During the meeting, when Mr. Pawar asked the Governor about the inordinate delay in the appointments, Mr. Koshyari said that he [Mr. Pawar] ought not to insist on it when the State government was not requesting it,” the editorial read.

However, Mr. Pawar had reminded the Governor that the Chief Minister had already sent a letter urging him to take a decision soon on the long-pending appointments, said the editorial.

“What should the State government do to remind the Governor that it is his Constitutional duty to sign the Cabinet’s recommendation. Must the State Cabinet gather at the Raj Bhavan and clap loudly or bang utensils to attract his attention over the matter?” said the editorial, in a sarcastic vein, alluding to Prime Minister Narendra Modi’s directives to the nation at the time of the first lockdown when the COVID-19 pandemic erupted in March 2020.