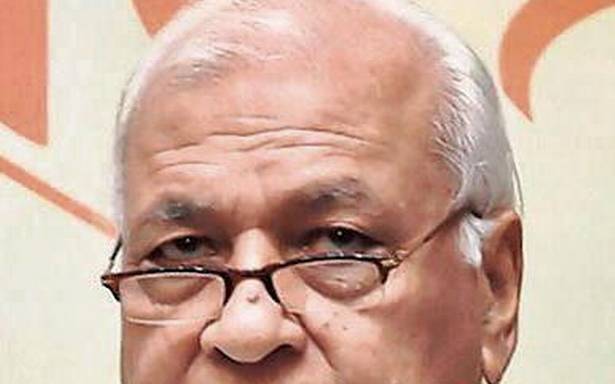 Governor Arif Mohammed Khan on Monday sought a report from the Sree Sankaracharya University of Sanskrit, Kalady, on the controversy surrounding the appointment of R. Ninitha, wife of Communist Party of India (Marxist) [CPI(M)] leader M.B. Rajesh, as an assistant professor in the Malayalam department at the university.

The university had come under fire from the Congress and the Bharatiya Janata Party (BJP) for ‘perverting’ the selection process and ‘passing over’ eligible candidates to appoint Ms. Ninitha in the Muslim reservation category.

Both parties had separately highlighted her appointment as emblematic of the entrenched nepotism in the CPI(M) and the LDF government. They had targeted Democratic Youth Federation of India (DYFI) State president A.A. Rahim and A.N. Shamsheer, MLA, with similar charges. The leaders had denied the allegations.

Leader of the Opposition Ramesh Chennithala sought to make an election issue out of the slew of ‘back-door appointments’ by the government. CPI(M) workers and their families had hugely benefited from the flurry of regularisations at the fag end of the administration’s tenure. He released a list of relatives of top CPI(M) functionaries accorded well-salaried jobs in public sector entities and government-owned corporations.

The government had made it a practice not to report vacancies to the Public Service Commission (PSC). It had made over 3.5 lakh illegal appointments by circumventing the PSC selection process. Industries Department and Kerala Bank were bywords for favouritism in appointments. If voted to power, the UDF would make non-reporting of vacancies by department heads a criminal offence.

The BJP also accused the government of defrauding unemployed youth by bending rules to appoint CPI(M) members and their relatives in government jobs.

The State had also witnessed a tide of street protests against the ‘back-door appointments.’ They seemed to take a risky turn on Monday with a PSC rank holder dousing himself with kerosene in front of the Secretariat and threatening to set himself on fire. Organisations of persons waiting appointment via the PSC are on a strike in front of the edifice. The government has promised to extend the span of PSC rank lists.

CPI(M) acting State secretary A. Vijayaraghavan defended the appointments. The government had regularised persons who were on the jobs for more than 10 years. The previous UDF government had contracted most of them. They earned a pittance compared to permanent employees doing the same work. If retired, the workers would struggle to find another job, he said.