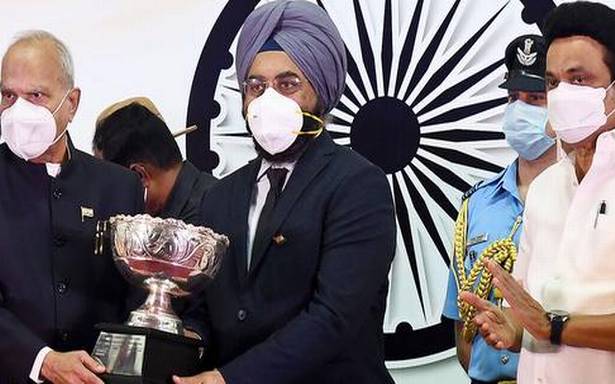 Addressing the ‘At Home’ reception, he appeals to people to continue their co-operation with the government in controlling the spread of virus

Speaking on the occasion, he appealed to the people of the State to continue their co-operation with the government in controlling the spread of COVID-19 by following the protocol and to achieve total vaccination. “I congratulate the Tamil Nadu Chief Minister and the entire government machinery, particularly the front-line workers…, on having worked tirelessly as a team to combat the second wave of COVID-19,” he said.

“On this historic occasion, I wish to pay my tributes to all those brave souls who suffered and sacrificed for the noble cause of our country’s freedom from British rule. Let us express our gratitude to all those who enabled our country to move forward on the path of progress,” Mr. Purohit said.

“Tamil Nadu is the home to a rich culture, an ancient language and friendly people. The State has very good infrastructure and efficient work culture. The untiring efforts of the State government have made Tamil Nadu the number one State in many fields. I expect all of you to work hard with total transparency and give corruption-free administration to people and make the State number one in all the fields,” Mr. Purohit said.

He also congratulated Bhavani Devi and other Olympians from Tamil Nadu on having participated in Tokyo Olympic Games. “I appreciate the efforts made by the State government at supporting them in all aspects. The government should continue the good work in identifying talent in sports for Olympics and other world-level competitions and provide them with all facilities to get more medals for the nation.”

He also appealed to the people to express their gratitude to the invaluable services rendered by ex-servicemen by donating generously to the Armed Forces Flag Day Fund, which is dedicated to their welfare. Mr. Purohit presented awards for the best achievements in the Flag Day collection. The Greater Chennai Corporation was awarded for the maximum collection and the Erode Municipal Corporation for the best collection. Among districts, Tiruvallur was awarded for the maximum collection, followed by Tiruchi and Chennai. In percentage-wise collection, Tiruvallur, Kancheepuram and Tiruvarur bagged the top three spots.

Earlier in the day, the Governor hoisted the national flag and took the salute of CRPF personnel.