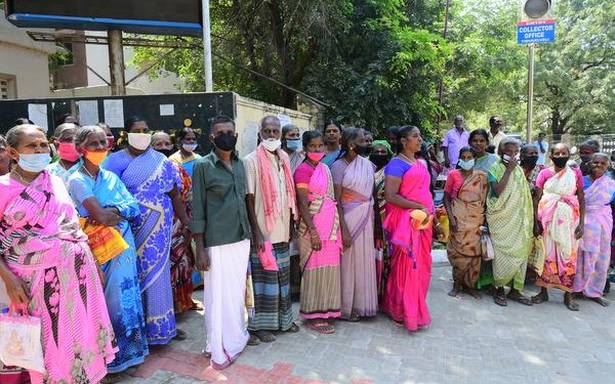 They have been left jobless for the past six months

A group of frail-looking labourers, who were once engaged under the Mahatma Gandhi National Rural Employment Guarantee Scheme (MGNREGS) and rendered jobless now, submitted a petition to Collector V. Vishnu on Monday seeking regular hiring under the scheme.

The petitioners from Vadakku Salaipudur, Ramakrishnapuram, Pallivasal and Seevalaperi said they were once hired under the MGNREGS for work by the village panchayats but for the past six months they have left jobless. As their livelihood has been wiped-out, most of them were starving and many were unable to have one good meal a day.

Considering their pathetic condition, the Collector should instruct the officials concerned to hire them again, they appealed.

A group of villagers from 15th ward of Vickramasingapuram municipality submitted a petition accusing Hindu Religious and Charitable Endowments Department of attempting to chase them away from their houses as they were being treated as ‘encroachers’.

The petitioners said they were living in houses built by their ancestors ‘after purchasing the land legally’, but they received a notice from Papanasa Swami Temple authorities in July last saying they should leave the place as they were living in houses built on the land belonging to Vadakkuvai Selvi Amman Temple, being administered by the Executive Officer of Papanasa Swami Temple.

It also asked the residents to execute separate tenant agreements with the temple management and pay rent. Otherwise, the houses would be demolished, the notice warned.

“We are all labourers and are living in houses built by our ancestors. For these houses we have got power and drinking water connections and are paying tax to the local body. Without objecting to the ownership of these houses for the past several decades, the HR and CE Department has created a panic among the residents. We cannot wage a legal battle against the government. Hence, the Collector should take steps for giving free house site pattas for the land,” they said.

Another group of villagers from Krishnaperi near here said the had received eviction notice from the Tamil Nadu Slum Clearance Board (TNSCB) for reportedly staying on the land belonging to the Board. They have been asked to give their consent to move to the TNSCB apartments.

“Our children are studying in the neighbourhood school and we take our cattle to graze in the nearby area, how can we move to an apartment? Instead of evicting encroachers from Krishnaperi tank, the TNSCB tries to move us out illegally. Some of us have built permanent houses worth about several lakhs of rupees. We’ll suffer hefty loss if we are moved out,” they said.

02/15/2021 India Comments Off on Give us jobs again under MGNREGS, say labourers
TV & Movies