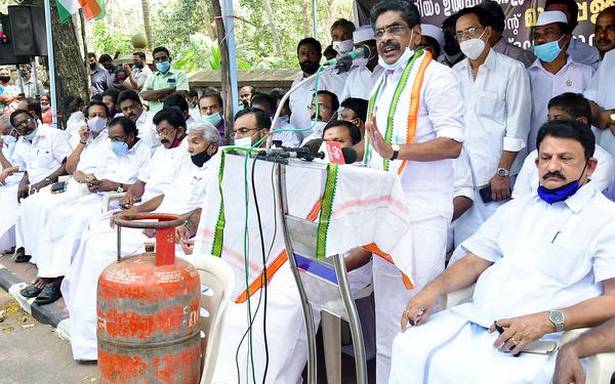 All India Congress Committee general secretary and former Chief Minister Oommen Chandy has accused the Central and State governments of burdening the common man through exorbitant taxation on fuel, triggering the rise in petrol and diesel prices.

Inaugurating a sit-in led by Kerala Pradesh Congress Committee (KPCC) president Mullappally Ramachandran against the fuel price increase, he said the Central and State governments were fleecing consumers by levying tax worth almost three times the basic price of fuel.

He urged the State government to give up the tax that would accrue from the recent hike in fuel price.

“Only a government that understands the problems of the common man can take such a step,” he said, recalling that the previous United Democratic Front regime led by him had adopted such a move to rein in the spiralling fuel price. Mr. Ramachandran said Prime Minister Narendra Modi and Chief Minister Pinarayi Vijayan had proved themselves to be representatives of the exploitative class.

He said the rising price of petroleum products had worsened the plight of the masses already groaning under the impact of the pandemic-induced financial crisis. “Prices of most essential commodities are also steadily rising,” he said.

KPCC and District Congress Committee office-bearers participated in the satyagraha.