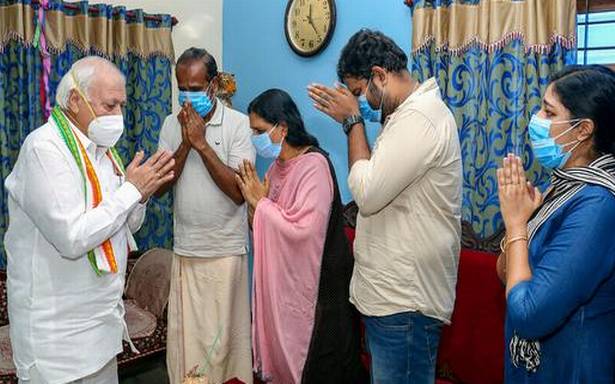 He visits family of Vismaya in Kollam, calls for creating awareness on ‘social evil’

Governor Arif Mohammed Khan has said that girls should be mentally prepared to say no to proposals demanding dowry.

Also read: In Kerala, dowry and alcoholism turn life a living hell for many women

Visiting the family of Vismaya here on Monday, Mr. Khan said he was willing to work as a volunteer to spread awareness against the social evil. "Any daughter of Kerala is my daughter, I feel like crying," said a visibly emotional Governor.

"Though Kerala’s education, social welfare and health indicators are much better compared to many other States, there are still some social evils and dowry is one," he said.

Urging the media to create awareness about the issue, he observed that despite laws being quite strong to take care of such crimes effectively, an organised movement against dowry was needed.

"If somebody makes it clear that they want dowry, they should be told in stern terms the proposal can’t go ahead. Such demands must not be entertained by the girl’s family, and for that, you need awareness," said Mr. Khan. He appealed to the NGOs to launch a special movement against dowry.

06/29/2021 India Comments Off on Girls must say no to dowry, says Kerala Governor
India