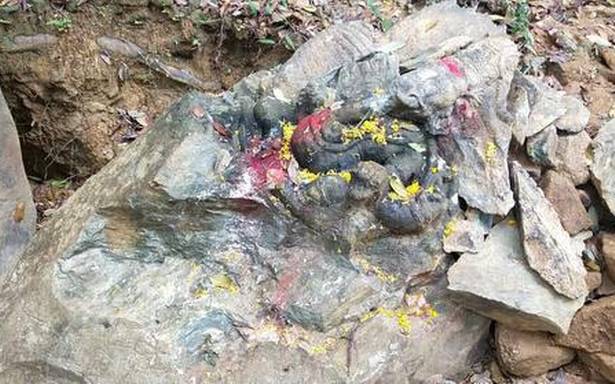 Highlighting the continued prevalence of people searching for buried gold in Devala and Nadugani near Gudalur, a group is believed to have vandalised a more than a century-old carving of Ganesha, which is believed to have been placed in the area by people who first prospected for gold there.

The incident occurred in the area a few days ago, and the police have registered a case. Local residents said that there had been myths surrounding the idol, located in Kil Nadugani, that it had been made and placed in the area by prospectors who arrived in the area looking for gold in the hillocks in the region. “There were also reports that gold excavated from the hills was buried underneath the statue,” said a local Adivasi resident from Pandalur.

Local residents, who noticed that the carving had been destroyed, informed the police, who registered a case and are investigating.

Police officials said that they did not think that the group who damaged the statue had managed to find anything valuable, but added that they were continuing their investigations into the incident.

Despite a recent crackdown on illegal mining in Devala and Pandalur, local residents said that the practice continues, with the lack of jobs caused by the COVID-19 pandemic leading to educated youth also trying their luck in the illegal mines. Equipment, including high-pressure water pumps and machinery are being used to hack away at the hillocks by residents trying to strike it rich at the mines, police sources revealed.

The Forest Department has recently begun armed patrolling and has also started using unmanned aerial drones to discourage illegal mining, but the practice still continues in many parts where surveillance is difficult, they added.