After a two-year Covid-induced hiatus, Gandhi Jayanti celebrations returned to the sprawling Chaoyang park in Beijing as it resonated with the recitation of his famous quotes by Chinese schoolchildren and his bhajans by members of the Indian Diaspora.

Gandhi Jayanti is celebrated every year at the picturesque Chaoyang park ever since the statue of Gandhi, sculpted by acclaimed sculptor Yuan Xikun, was installed in 2005 on the banks of a lake amid serene surroundings to enable his admirers to pay tributes to the Mahatma.

Yuan is also well connected with the ruling Communist party of China and is the long-time curator of the Jin Tai art museum located in Chaoyang park.

Yuan carved the Gandhi statue with a unique posture of the Mahatma sitting with a book in his hand.

The installation of Gandhi’s statue for the first time officially in Beijing was regarded as politically significant as for decades the Mahatma has remained an enigma in China.

Since the installation of Gandhi’s statue, on every October 2 a set of Chinese school children recite his famous sayings, highlighting non-violence, adherence to truth and the importance of conservation. The practice was disrupted due to the pandemic for the past two years.

This year, over a dozen school children recited Gandhi’s sayings in both Chinese and English, drawing applause at a well-attended gathering at the Jin Tai art museum which included India’s Ambassador Pradeep Kumar Rawat and Yuan.

Ambassador Rawat, who played a role in the installation of the statue along with Yuan during his previous diplomatic stint in Beijing in 2005, said though born in India, Mahatma Gandhi’s message resonated with all of humanity.

Gandhi’s sculpture, Yuan said, has “become a symbol of friendship between the people of India and China.”

“Why do I want to create Mahatma Gandhi? Gandhi’s devotion, self-restraint and self- motivation have many refractive intersections with the ancient Chinese thinkers Confucius, Mencius and Lao Zhuang,” Yuan explained.

“The excellent cultural heritage he left us is the glory of the whole of mankind. He was a man of nature and used in moderation, which is the sustainable development we advocate now,” he said. 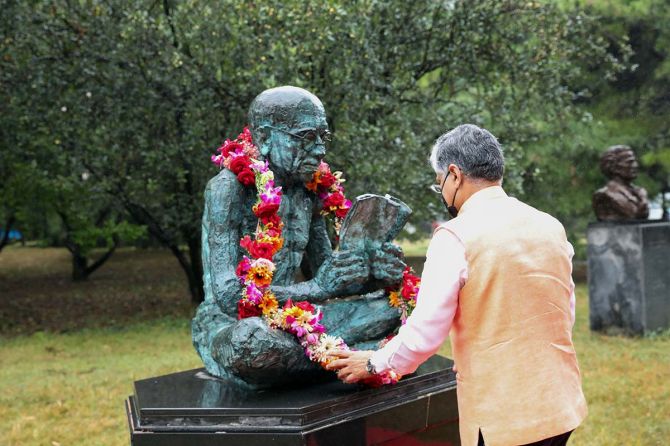 This year’s highlight was the short play Being Mahatma, which was enacted at the museum, highlighting the handling of some of the most tense situations by Gandhiji at the height of the Independence movement.

Scripted and directed by Dr T S Vivekanand, a diplomat at the Indian embassy, Being Mahatma is a play which attempts to understand why Gandhi was a great soul.

“It tries to make the case that Gandhi communicated with the masses differently than others,” Vivekanand, a poet in Tamil and English, said.

The cast included Joji Luka, a security officer at the Indian embassy who acted as Gandhi, besides Rajashree Behera, first secretary, and Neeru Thakkar, whose husband Lekhan Thakkar is the Counsellor, (Economic and Commerce) at the India mission.