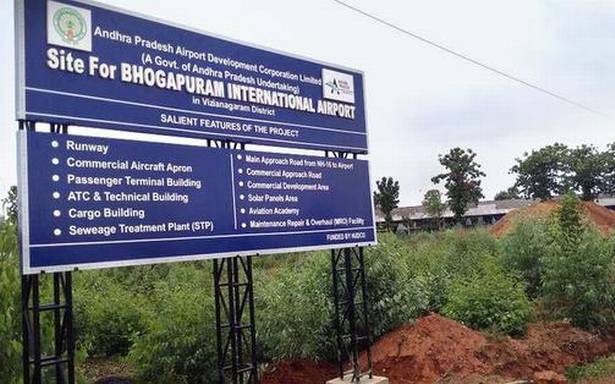 However, Chandrababu Naidu government cancelled the entire process in January, 2018 and called for fresh tenders with new rules and regulations.

Instead of revenue share method, the government asked the bidders to pay fee as per passenger traffic. GMR which emerged winner offered ₹303 per passenger and GVK Group offered ₹202 per passenger. Reliance Airport Developers, Essel Infraprojects, Fairfast India Holdings, National Investment and Infrastructure Fund also participated in the process. The then Chief Minister N.Chandrababu Naidu laid foundation stone for the airport in the second week of February, 2019.

Although he formally initiated the process, the future of the project hangs in balance with the change of government and priorities of YS Jagan Mohan Reddy government.

“Mr. Jagan is very particular about transparency in tender process in all projects.

In this background, he is expected to review Bhogapuram airport issue very seriously since he himself strongly raised the issue during election process,” said a senior official.

Lok Satta Party State president Bhisetti Babji urged the government to begin tender process again since construction of the airport had not yet begun.

CITU State president Ch. Narasinga Rao who led agitations over the ‘controversial’ tender process said that proper review was a must for all projects including international airport.

“AAI may participate in new tender process if conflict-ridden clauses are removed. Interests of the government and air travellers should be protected even if private companies are allowed to construct the project,” he added.