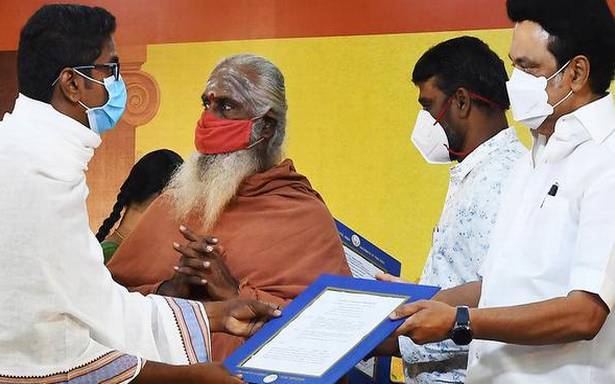 C. Muthu Irulan always had a passion for performing pujas at temples. Born in the community of potters who perform pujas at Ayyanar temples, he underwent training for priesthood and worked as a priest.

Later he joined the archaka course at the Madurai Meenakshi temple conducted by the Hindu Religious and Charitable Endowments (HR&CE) Department in 2007. The course was launched by the DMK government that year.

After working as an archaka at a few temples, including the Puttuthoppu temple, he was appointed on Saturday as the archaka of the Balathandayuthapani temple on Melamasi Veedhi in Madurai.

Asked how the conservative among the devotees would take his appointment, Mr. Muthu Irualan was confident that their mindset could be changed by the manners of the newly appointed priests. “How we conduct ourselves while performing puja is important. I have already learnt the agamas and I will meet the expectations of devotees,” he said, pointing out that the first ‘mandakapadi’ of the Meenakshi temple is done by the potter community.

His views were shared by G. Vannamuthu, who has been appointed as the priest of the Nagamalai Murugan temple. “Even as a student, I was attracted to temple worship. Later I developed a desire to become a priest,” he said. He has already worked as a priest for 14 years after completing his course at the Tiruchendur Murugan temple.

HR&CE Commissioner J. Kumaragurubaran said 58 priests were appointed, and 29 of them belong to the Other Communities, 16 to the Backward Classes, 8 to the Most Backward Classes and 5 to the Scheduled Castes.

A person who is really happy about the development is Ranganathan Archakar, president of Tamil Nadu Association for Trained Archakas. He is one of the petitioners in the Supreme Court for their appointment, and was subjected to brutal attacks. “Social justice is achieved. Their appointment is a great event in the history of India. Chief Minister M.K. Stalin has removed the thorn in the heart of Periyar, who longed to see people from all castes becoming temple priests,” he said.

While critics say their appointment goes against the agamas, M.P. Sathyavel Murugan, an expert in agamas, argues that there is no reference to caste at all. “Sivachariyars who perform puja at the Siva temples are Adhi Saivites and considered themselves Vellalas. They have made a representation to the Justice Maharajan Commission and the Justice Janardhanan Commission for inclusion in the list of Backward Classes,” he pointed out.

Mr. Murugan says that according to ‘Kothira Padalam’ in Kamika Agama, anyone can become a priest if they are initiated properly. “It says, Sivodh Bootham Sivam Yajeth [If given initiation or ‘diksha’, anyone can be a sivacharya. Meikandar, the greatest exponent of Saiva Siddhanta, had given initiation to Arulnandhi Sivam. Saint Thirunavukkarasar gave initiation to the son of Appoothi Adikal,” he said.

To reiterate the point that there is no bar on women becoming priests, he cites a verse by Thirugnanasambandar in praise of Thadakai, the daughter of the priest of the Thirupanandal temple. “She had performed puja and the Lord bowed his head to receive the garland. Sambandar even addresses Thirupanandal as Thadagaieswaram to honour her.”

As for Vaishnavism, he says the example set by Saint Ramanuja was proof enough that it is against caste domination. “There is a song by Nammalvar, one of the 12 Alwars, that even a chandala will be considered a guru if he is a devotee of Lord Narayana.”

Mr. Kumaragurubaran said Sanskrit and Tamil would be used for performing ‘archanai’ at temples. “It is for the devotees to choose the language.” He also made it clear that the hereditary trustees would not be disturbed. “There is some false news about the issue. The hereditary trustees have all the legal protection. If there is a vacancy in the ranks of non-hereditary trustees, the government will fill the post,” he said.

08/15/2021 India Comments Off on From periphery to sanctum sanctorum: a long journey for some new archakas
India