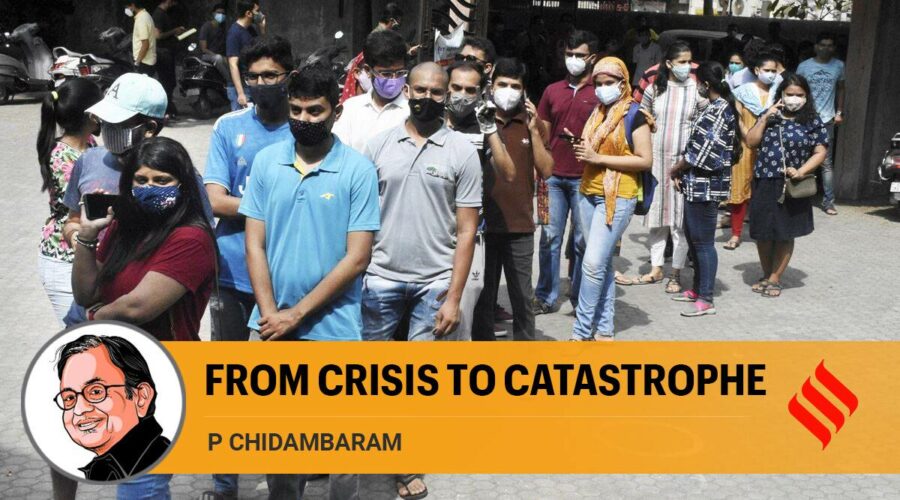 Thanks to the incompetence of the Central government, the boast of “India is the pharmacy of the world” has vanished and, instead, we are pleading for supplies from other countries and other manufacturers who have limited quantities of vaccines to supply to India. When you read this column, one major event would have been rolled out by few states willingly, some reluctantly and some not at all — the vaccination of all adults in the age group 18-44 years. Another event — the counting of votes — would have begun at 8 am today. I write this essay without knowing the outcome of these two events.

The popular myth of ‘vaccine hesitancy’ has been exploded by the number of persons queuing up to receive their first shot and many such persons being turned away on account of shortage of vaccines. On April 2, 2021, we had vaccinated 42,65,157 persons and there is no reason why we cannot attain a number near that number as the daily average. However, the average rate of vaccination in April fell to about 29 lakh per day. The proximate reason is the insufficient supplies of vaccines to hospitals. Another reason may be the extension of lockdown days and hours. At this rate, it will take 240 days to vaccinate the remaining 70 crore adults.

Funds should not be a constraint. At an assumed average price of Rs 250 per dose, the cost of administering two doses to every one of the 70 crore adults will require Rs 35,000 crore — a sum already allocated in the Budget. All other obstacles ought to have been removed by May 1, but if a new price is not negotiated quickly, the five prices announced by the two manufacturers could become a deterrent.

Thanks to the incompetence of the Central government, the boast of “India is the pharmacy of the world” has vanished and, instead, we are pleading for supplies from other countries and other manufacturers who have limited quantities of vaccines to supply to India. The ultimate humiliation will be when we accept China’s offer to supply Sinopharm and other China-made vaccines. Remember, the Central government held off for several weeks Dr Reddy’s Laboratories that was ready to start the trials of the Russian vaccine, Sputnik V. Recall also that the DCGI declined emergency use approval to Pfizer-BioNTech’s vaccine that had won approval from several acknowledged regulators and was in use in the US, UK, and Europe!

The biggest worry is the insufficient supply of vaccines. Reports of vaccine shortage continue to pour in from reputed hospitals. If this is the position in metropolitan cities, imagine the plight of hospitals, especially small and medium size hospitals, in Tier-2 and Tier-3 cities and large towns. The vaccine shortage may be aggravated when the 18-44 bracket flocks to the hospitals. I shall not be surprised if hospital administrators are besieged by angry protesters in much the same way it is happening now in the case of shortage of hospital beds and oxygen.

No one knows all

Why did the Central government fail so miserably? I can list a number of reasons that have been listed by the media (especially foreign media):

(2) Over centralization: all decisions had to be taken by one person, the Prime Minister, and the states were reduced to obedient subordinates;

(3) Poor advice: the trio of Dr V K Paul, Dr Randeep Guleria and Dr Balram Bhargava, with great respect to them, seem to spend more time on television than to study the data and give fearless advice to the PM;

(4) Awful planning: without the Planning Commission, there is no organisation that seems to know what planning is —imagining multiple scenarios, including the ‘worst case’, and joining the myriad dots;

(5) Misplaced emphasis on Atmanirbhar without realising that self-sufficiency had been reduced to narrow nationalism; and

(6) Pampering the two Indian manufacturers instead of encouraging more to join the national effort to manufacture or import vaccines and distribute them efficiently;

We can still prevent a catastrophe. The Prime Minister needs to step back, empower a group (no more than nine) of independent-thinking ministers, medical experts, planners and implementers (serving or retired, public servants or private citizens), name it the Empowered Crisis Management Group, fully support the group, and allow it to take charge and fight the spread of the pandemic. The Prime Minister should only evaluate the outcomes. Harvard teaches that lesson, so does hard work.