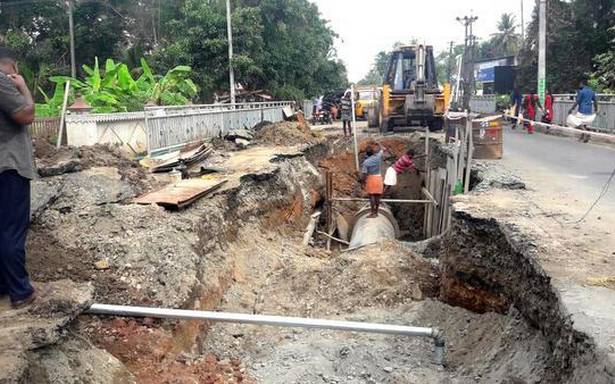 Frequent bursting of pipes supplying potable water under the Alappuzha drinking water project are causing hardships to residents in the Alappuzha municipality and nearby grama panchayats.

Around five lakh consumers have been left without water for the last 16 days following a series of pipe-bursts at Thakazhy.

A 1.1-km stretch of the pipeline at Thakazhy witnessed at least 38 bursts in the last two years. After a gap of two months, a portion of the pipe on the stretch ruptured on May 13.

Following this the Kerala Water Authority was forced to stop water supply. Although, the KWA fixed the leak and started pumping on May 18, within two days pipeline ruptured near Thakazhy temple bus stop.

The Alappuzha drinking water project was executed with Central assistance under the Urban Infrastructure Development Scheme for Small and Medium Towns (UIDSSMT).

As part of the project, new pipeline was laid and it was launched in 2017.

The KWA’s failure to prevent recurring pipe bursts has irked the residents. Public Works Minister G. Sudhakaran had earlier lambasted the KWA and contractors for repeated bursting of pipes.

Mr. Sudhakaran alleged corruption in the execution of the project and demanded officials and contractors be put behind bars.

Meanwhile KWA officials said that as a permanent solution they need to replace 1.1 km pipe at Thakazhy.

“The only solution to the problem is to completely replace the pipe on the stretch. There is also a growing demand to change the alignment of the pipeline. We hope to find a permanent solution to the issue in 2-3 months,” the KWA official added.