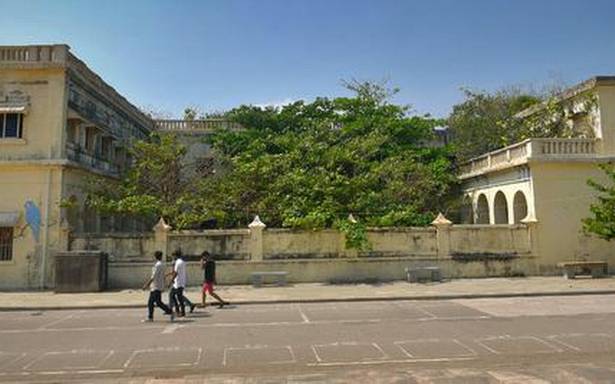 After crying for attention for several decades, the Pensionnat De Jeunes Filles, considered to be India’s only French girls’high school run by the Puducherry government, will soon be taken up for restoration under an initiative of the Puducherry Smart City Development Limited (PSCDL).

The two-storey French architecture-styled building, which remained in a precarious condition, was provisionally shut down along with two other government schools that functioned out of heritage buildings in 2014 after the collapse of the 144-year-old Marie (Town Hall) building on the Beach Promenade.Students of the three schools were shifted to other institutions.

While the Calve College and V.O.C School, previously known as Ecole Primairie, built in 1886 were taken up for restoration last year, the Pensionnate De Jeunes Filles was not included in the list due to its precarious condition.

A team fromNational Centre for Safety of Heritage Structures (NCSHS),led by Dr. Arun Menon, Associate Professor, Structural Engineering Laboratory, Department of Civil Engineering, IIT Chennai,who had inspected the buildingrecently,submitted their report to the government with recommendationsfor ensuring structural safety in the building.

“We will be carrying out the tests to determine thecompressive strength of the masonry in the ground storey andhave planned for retrofitting of the historic buildingas per the directions of NCSHS. The works are likely to be taken up this year,” an official said.

NCSHS had also recommended a complete mapping and damage documentation of the current situation of the building.

In the 1980s, the school faced a different kind of danger when there was a proposal to demolish it to create space for a government building. There were protests and parents and teachers submitted a petition to the government to preserve the structure. The then Lt. Governor T.P. Tiwari, passed an order in 1984 to save the school from being razed down.

According to A. Arul, architect of Indian National Trust for Art and Cultural Heritage (INTACH), “A detailed project report has been prepared by INTACH for the restoration of the building. He said that the restoration would be taken up under Smart City and the original grandeur of the building will be retained.”

The grade II A heritage building has French architectural styles, including a colonnaded portico, a teak staircase, and wooden louvered shutter. ThePensionnat de Jeunes Filles was the Bedier house before the Second French Empire.

It 1858, it was rented and then sold to the colony to house a school for European girls. Classes were taught by the nuns of a Catholic congregation. The site was chosen on the sea-side for sanitary and health reasons, according toINTACH.

The building was donated by Smith family who expressed a wish that the building must always be used as a school for girls. Today it is the only French medium school for girls. After the school was closed in 2014, the students were shifted to another school on Mission Street.