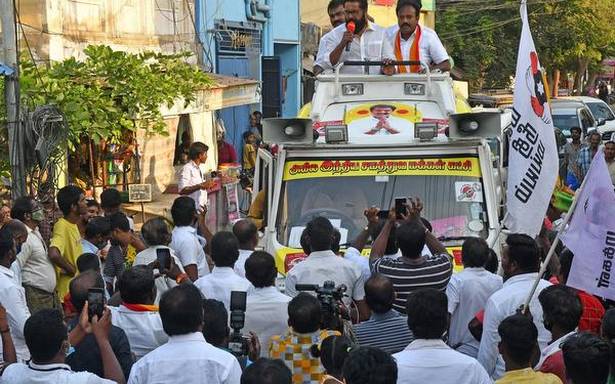 Both the Dravidian parties were trying to make the people lazy with their populist freebie schemes, while the Makkal Needhi Maiam-led alliance has promised free laptops and Wi-fi to upgrade quality of education of students, said All India Samathuva Makkal Katchi founder Sarath Kumar.

Campaigning for MNM candidate for Rajapalayam Assembly constituency Vivekanandan here on Saturday, Mr. Sarath Kumar said the freebies had made the people lazy. “They are not going for jobs and agriculture sector is facing labour shortage,” he said.

Mr. Sarath Kumar said that rural areas will be provided with all the facilities of urban areas. Similarly, Information Technology companies would be brought to rural areas. “The youths can work in IT companies in local areas and also take care of their farms. This will also protect farming activities from extinction,” he added.

Mr. Vivekanandan promised to set up a cold storage facility for mangoes in Rajapalayam and its surroundings. He also promised to introduce heli-ambulance services in Rajapalayam for rushing accident victims to hospitals in places like Madurai and Tirunelveli to save their lives.