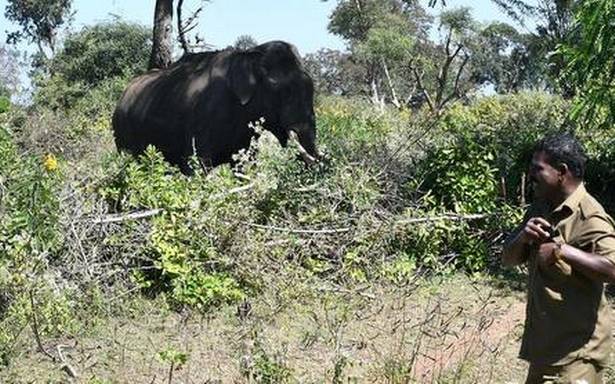 Kumkis may be deployed to get close to injured elephant

Forest Department officials are considering a more direct approach to treat an injured elephant that has been roaming around Bokkapuram, in the buffer zone of the Mudumalai Tiger Reserve, for two weeks.

The elephant, an adult tusker, was first noticed around Bokkpuram on December 12, with an injury to his back. Forest officials decided to treat the animal with medication, kept inside fruits and other edibles. However, the condition of the elephant continued to deteriorate over the last two weeks, officials said.

“He has become very slow and is not leaving the human habitation. We are also unable to get too close to the animal as we fear he may lash out at forest staff,” said Deputy Director of the MTR buffer zone L.C.S. Srikanth.

Forest veterinarian K. Rajesh Kumar will continue to monitor the animal over the coming days. Medication will be provided to the elephant to allow it to convalesce, he added.

However, if such attempts fail and there is no considerable improvement in the condition of the animal, the Forest Department may have to deploy kumkis to get close to the animal and treat it. “Kumkis are now being brought to Bokkapuram. Based on the opinion of veterinarians, we will take a call on employing them to treat the elephant,” said Mr. Srikanth.