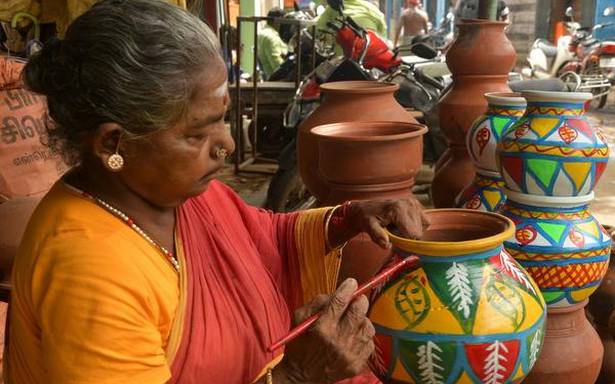 Potters in the city, living in Thiruvanaikovil have avoided making earthen pots ahead of the Pongal festival this year due to the intermittent rains. The rainfall has come at a time when the pots should have been baked and drying, they rued.

The year was not a fruitful one for potters in Mela Kondayampettai where they make earthen lamps, pots and stoves for a living. While many have moved on to construction work to make ends meet, only three to four families continue to make the earthenware, they said.

Many workshops, such as M. Inbarasu’s were locked up after poor sales during Karthigai. “We struggled to make lamps as it would rain suddenly, rendering hours of hard work go waste. Many unbaked lamps were discarded,” he said.

A mini-truck’s worth of clay costs ₹3,000 but on most days, the potters are unable to break even, they said. “The clay becomes watery and it is difficult to mould it to the shape we want,” Mr. Inbarasu said.

Another potter, S. Ramu, said that while this time of the year would be a good period of sales for potters in the area, sales have been bad this year. “We have not been able to make and sell even one pot this year,” he said.

Meanwhile, a vendor of earthenware in Gandhi Market said that the pots being sold at her shop this year were from Madurai and Puducherry. “We were only able to purchase some earthen lamps from makers at Thiruvanaikoil. We had to buy the pots for Pongal from makers in other districts,” the vendor said.