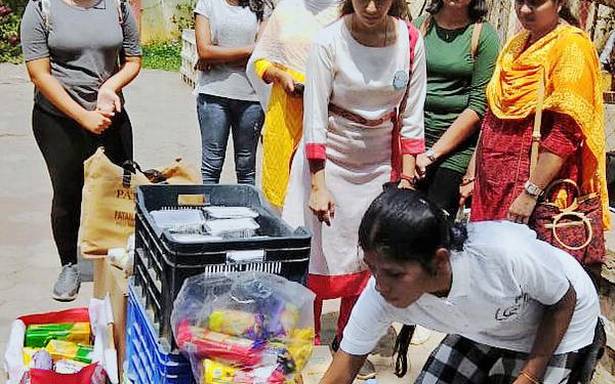 1,000 food packets distributed among shelter-less on the streets and at orphanages

Ahead of World Hunger Day on May 28, volunteers from Food Bank Coimbatore distributed food items to the needy on Saturday.

B. Vaishnavee, founder of the organisation, along with 30 volunteers, assembled at VOC Park on Saturday morning with nearly 1,000 food packets and other items such as biscuit packets and water bottles. These were distributed to old-age homes, orphanages and to the homeless people on the streets, according to the volunteers.

Ms. Vaishnavee told mediapersons that all the food items were prepared at households in the city. The organisation knew from experience the areas in the city where the homeless were in need of food.

A total of 500 food packets were distributed to five homes, including orphanages and shelter homes around the city and to the Coimbatore Medical College Hospital, B. Harikrishnan, a long-time volunteer with Food Bank Coimbatore, said.

The remaining food packets were offered to the homeless people in other areas including Town Hall, Gandhipuram, Saravanampatti and Peelamedu, he said.

Started in October 2015, Food Bank Coimbatore initially had only two members but has now grown into an organisation with over 200 active volunteers, Ms. Vaishnavee told The Hindu. The organisation has undertaken a survey named ‘Beggar Free City’ to collect details of alms-seekers in various parts of the city. “This is a long-term mission [as] alms-seekers are coming inside the city every day, [but] we don’t know where they’re actually coming from,” she said. Food Bank Coimbatore will hold various events like open art competition, speech, storytelling, and photography on the topic ‘Solutions for a Hunger-Free Nation’ at Brookefields Mall as a part of its awareness programmes, Ms. Vaishnavee said.