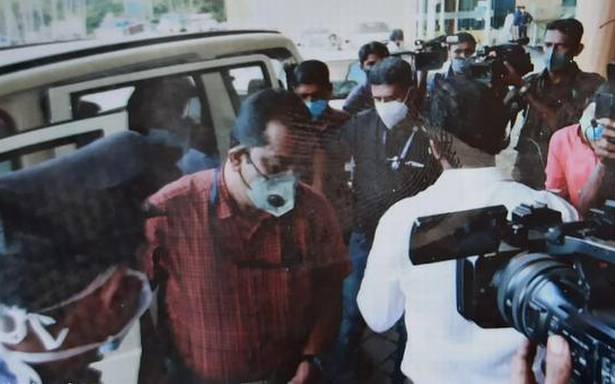 Two teams purportedly went to arrest him and found him absent; investigators are processing information that the IUML leader reported sick and got himself admitted to a private hospital

The Vigilance and Anti-Corruption Bureau (VACB) descended on the house of former Kerala PWD Minister and IUML leader Ibrahim Kunju in Kochi early on Wednesday purportedly to arrest him on suspicion of graft in the construction of the faulty and recently decommissioned flyover bridge at Palarivattom in Kochi.

Two teams from Kottayam and Thiruvananthapuram, accompanied by local police, entered Mr. Kunju’s house with a search warrant and found him absent.

Officials at the VACB directorate here said investigators were processing information that Mr. Kunju had reported sick late on Tuesday and got himself admitted to a private hospital.

If that were the case, officials said, the agency would constitute a medical board of government doctors to gauge his health status before proceeding further.

The ambitious project to ease traffic in Kochi in a few months after the inauguration in 2016 metamorphosed into a symbol of political sleaze during the previous United Democratic Front (UDF) government.

The raid on Mr. Kunju’s house has arguably rendered the government vulnerable to Opposition criticism that it was using the VACB to target political opponents.

Leader of the Opposition Ramesh Chennithala had said the government was desperate to divert public attention away from the multiple investigations by at least four Central agencies against the Chief Minister’s Office on suspicion of abetting gold smugglers and corruption. He had slammed the arrest of IUML lawmaker M. C. Kamaruddin recently in connection with a suspected Ponzi scheme.

VACB officials said they had told the court that Mr. Kunju’s custodial investigation was necessary to prosecute the Palarivattom corruption case. Moreover, they feared that Mr. Kunju would attempt to sway witnesses if investigators allowed him to be at large.

The VACB’s reported move to arrest Mr. Kunju appeared to have compounded his legal troubles. The Enforcement Directorate was probing Mr. Kunju on the charge of money laundering.

Girish Babu, the complainant in the ED case, had moved the court accusing Mr. Kunju of offering him an inducement of ₹5 lakh to withdraw the petition. Subsequently, the court ordered the VACB to investigate the charge as a separate case.

The probe against Mr. Kunju also seemed to have come close to the IUML leadership. In May, the VACB had inspected the accounts of Chandrika, the IUML owned newspaper, on the charge that Mr. Kunju was using its bank accounts to launder allegedly ill-gotten wealth.

The VACB has so far arrested eight persons, including former PWD secretary T. O. Sooraj, in connection with the multi-crore Palarivattom bribery case. It had questioned Mr. Kunju several times in Thiruvananthapuram based on Mr. Sooraj’s statement.

The accusation against Mr. Kunju was that he had stacked the deck in favour of the builder.

The former Minister had allegedly ordered the release of ₹9 crore from the Treasury as advance to the builder. He had reportedly extended the aid at a nominal rate of interest ‘brazenly advantageous’ to the private firm. The VACB had told the court that the ‘largesse’ to the builder had, by a conservative estimate, cost the exchequer ₹60 lakhs in terms of interest alone.

Mr. Kunju has denied the accusations of bribery. He has maintained that as Minister he had merely given administrative sanction for the project. Moreover, it was not his mandate as Minister to bother about the nitty-gritty of the execution of the contract.