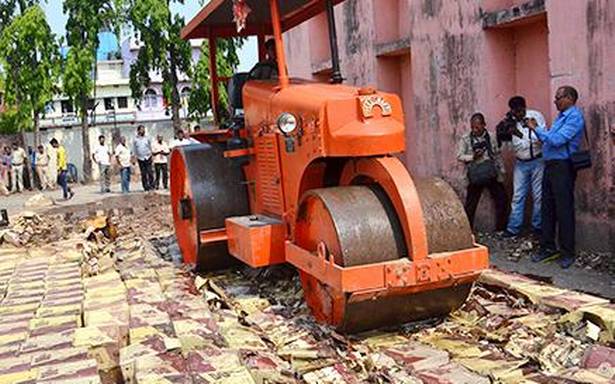 Some persons admitted to hospital in a critical condition, say villagers

At least five people died in Bihar on Friday in what is suspected to be a hooch tragedy. Officials said the cause of the deaths could be ascertained only after the post-mortem reports are available.

The deaths occurred under the Sohsarai police station of Nalanda district on Friday night, said villagers. The victims were identified as Bhago and Manna Mistri, both 55, Sunil Kumar, 24, Dharmendra alias Nageshwar, 50, and Arjun Pandit 51. A few more have been admitted to hospital in a critical condition, they said.

“My father came home last night drunk and complained of a burning sensation in his stomach. He died even before we could take him to the hospital,” said Jyoti Kumar, daughter of Manna Mistri. Lalita Devi, a relative of Bhago Mistri, also said the same.

On Saturday, officials reached the spot and said only three people had died but the reason for their death had not been ascertained yet. An official Kumar Anurag said they were waiting for the post-mortem report.

In 2021, more than 40 people had died after consuming spurious liquor in Gopalganj, West Champaran, Samastipur and Vaishali districts. The Bihar Prohibition and Excise Act, 2016 declared the State a dry State in April that year.

Police records say over3.5 lakh cases have been lodged and over 4 lakh arrests made under the stringent prohibition laws till December, 2021.

Recently, the Chief Justice of Supreme Court had said at a seminar cases under the Act have been clogging courts.