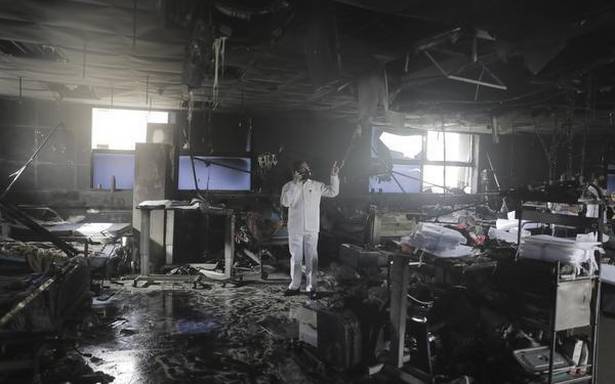 They were held for alleged negligence and violation of the fire safety norms, says an official

Police on Sunday arrested the chief executive officer and the chief administrative officer of a Palghar-based hospital where a fire killed 15 COVID-19 patients two days back, an official said.

After their arrest, the hospital’s CEO, Dr Dilip Bastimal Shah (56), and CAO Dr Shailesh Dharmadev Pathak (47) were produced before a Vasai court which remanded them in police custody for one day, he said.

They were held for alleged negligence and violation of the fire safety norms, the official from the Mira-Bhayander Vasai-Virar police’s crime branch said.

The blaze erupted on Friday in the Intensive Care Unit (ICU) located on the second floor of the four-storey Vijay Vallabh Hospital at Virar in Maharashtra’s Palghar district, about 70 km from here.

The hospital’s CEO and the CAO have been booked under Indian Penal Code Sections 304 (culpable homicide but not amounting to murder), 337 and 338 (both dealing with rash or negligent act endangering human life), the official said.

During a probe into the incident, the police found the hospital allegedly violated several norms and guidelines of the state government and the Supreme Court, he said.

The hospital failed to get its fire audit conducted for the current year and also did not have the fire department’s No Objection Certificate (NOC), he said.

"The medical facility also allegedly violated several precautionary safety measures. If they had a proper fire- fighting mechanism, such a big tragedy would not have occurred," the official said.

He said the police are waiting for the electric audit and fire audit reports and more arrests may happen after that.

There were 83 patients in the hospital, 17 of them in the ICU when the fire broke out after a blast in the AC unit shortly after 3 a.m.. It was extinguished at 5.20 a.m., an official earlier said.

Maharashtra Chief Minister Uddhav Thackeray had directed the local administration to conduct a probe into the cause of the blaze and also announced an assistance of ₹5 lakh to the families of each deceased.