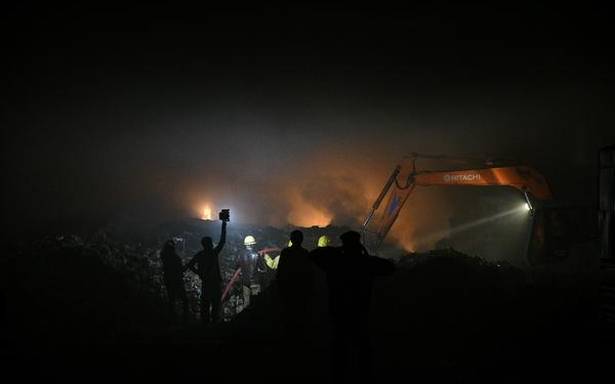 A fire broke out at the Theetukkal dumpyard in Udhagamandalam late Monday night, leading to a haze of acrid smoke hanging around the dumpyard and surrounding residential areas.

According to officials from the fire and rescue service at the Udhagamandalam station, it is believed that the fire was caused by a malfunctioning of the incinerator used to burn hazardous waste at the dumpyard. The fire broke out at around 8 p.m. on Monday and quickly spread around the dumpyard, with the fire visible from many parts of Udhagamandalam town.

Two fire tenders and ten water trucks were pressed into service along with more than a dozen firemen to battle the blaze. Firefighters battled the fire throughout the night to bring it under control.

G. Ravi Kumar, Station Fire Officer, Udhagamandalam, said that the fire had finally been brought under control on Tuesday. "We managed to save lakhs worth of equipment due to timely action,” said Mr. Ravi Kumar.

Officials said there were no injuries reported.

Residents living near the dumpyard said that smoke from the fire meant that many people were reporting breathing difficulties.

“For years residents have demanded that the dumpyard be closed down. Though there is considerably less open dumping of waste at the dump yard for the last few years, it remains a hazard to local residents and to wildlife living in the forests surrounding the dumpyard,” said M. Banumathi, a resident.