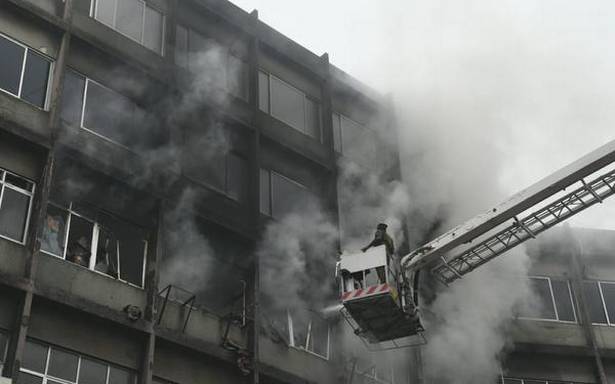 The blaze occurred at Gee Gee Complex, Bangaru Naicker Street, Anna Salai; the fire was put out in two hours

A fire broke out at a computer peripherals outlet on the third floor of a five-storey commercial complex on Anna Salai on Thursday morning. No one was injured in the incident.

According to the Fire and Rescue Services department, an alert about the blaze was received at 11.45 a.m. and immediately, fire and rescue services personnel from Triplicane and Egmore rushed to the spot with water tenders and a sky lift. Thick smoke emanated from the third floor and persons who were inside the building were quickly evacuated. Fire fighters from other stations were also pressed into service. Director General of Police, Fire Services, Karan Singha and other officers inspected the spot.

Fire Services personnel and police personnel were seen regulating the crowd that thronged to see the blaze in one of the busiest places in the city. The fire was put out by the personnel after two hours. Police are investigating the cause of fire.

07/22/2021 India Comments Off on Fire at commercial complex on Chennai’s Anna Salai, no injuries reported
India