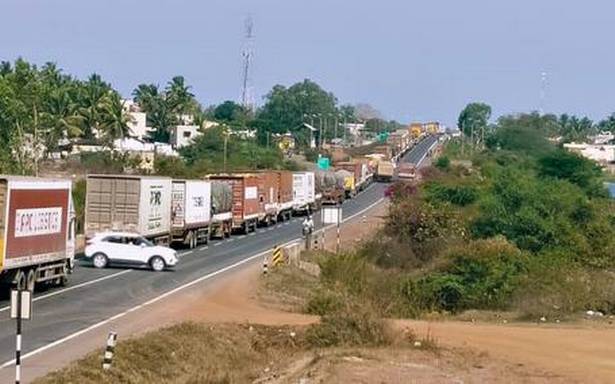 After much delay and a lot of haggling, a tender has been floated for laying of the six-lane expressway (bypass) and the four-lane service road between Hubballi and Dharwad.

In a press release issued from New Delhi, Union Minister for Parliamentary Affairs, Coal and Mines Pralhad Joshi has said that the National Highways Authority of India (NHAI) had floated the tender to convert the 31 km-two-lane bypass road between Hubballi and Dhawad into a six-lane expressway and for two-lane service road on each side under EPC (Engineering, Procurement and Construction) mode.

Mr. Joshi has said that the NHAI had floated tender for the work and the contractors were required to submit their bids before February 22. “Two-and-a-half years has been fixed for completion of the project and the contractor has to maintain the road for the next 5 years,” he has said.

Under the new tender, it has been proposed to remove all the existing toll plazas and set up only one toll plaza. This toll plaza to be set up between Kelageri and Narendra will ensure that those travelling between Hubballi and Dharwad will be exempted from paying the toll.

Mr. Joshi has said that although the Pune-Bengaluru National Highway was expanded into a six-lane road, the Hubballi-Dharwad bypass had remained a two-lane road, leading to congestion and frequent accidents. Based on the experts’ opinion, the proposal for the widening the bypass was prepared and subsequently Mr Joshi had had taken it up with the Union Government.

The total cost of the project is ₹1,200 crore. TheUnion Government has sanctioned ₹800 crore for the six-lane expressway and the four-lane service road and another ₹400 crore for land acquisition, DPR preparation and allied works.

It may be recalled that the frequent accidents on the bypass had led to agitations, particularly after a tragic accident on the road stretch took away the lives of 11 women from Davangere. The accident and the congested road drew the attention of the Supreme Court also, which sought a report from the State Government on the remedial measures taken. However, technical issues had delayed project as the contract for maintenance of the existing bypass and toll collection was still in force.

01/07/2022 India Comments Off on Finally, tender floated for six-lane bypass between Hubballi and Dharwad.
India