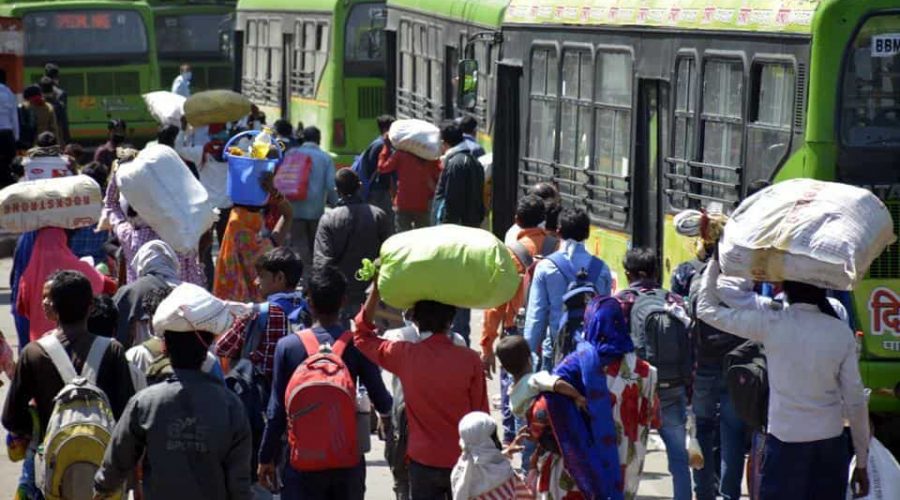 Around 3:30pm on Sunday, Subedar Khan, the in-charge of Delhi government’s newly set up shelter home for migrant workers in East Delhi’s Ghazipur, is seen earnestly trying to reason with a group of men who were walking out of the facility, with their bags, after a meal.

“You will be stuck if you try to move out of Delhi. The inter-state bus service is being stopped. Why do you want to risk your life by travelling in crowded buses? Don’t you know about the virus?” Khan told the men, who worked as masons in Delhi. He also handed them a pamphlet that listed the Do’s and Dont’s to avoid the spread of Covid-19.

“What will we do here when our families and friends have left for the village,” one of the men retorted, before the group dismissed Khan’s suggestion and walked out of the Ghazipur shelter that has been set up in a Delhi government school.

The facility, despite being a walking distance from the Delhi-UP border, which on Saturday saw tens of thousands of migrant workers trying to cross to neighbouring states, had only had three occupants till 5pm on Sunday. It has a total of 21 shelter rooms – with the first floor for women and the ground floor for men.

Later in the evening, chief minister Arvind Kejriwal, in a digital press conference urged all landlords not to pressure tenants to pay monthly rents. “If authorities find that landlords are pressuring tenants for rent, strict action will be taken,” Kejriwal said.

At another shelter inside a Delhi government school in Patparganj, which also came up overnight, there was zero-occupancy, when HT visited the facility. Deputy chief minister Manish Sisodia on Sunday expressed his disappointment with the low occupancy rates and said, “On the first day, only seven-eight people turned up. We hope that more will come and take advantage of these arrangements.”

The Patparganj facility, unlike the one at Ghazipur, had no banners informing people about the availability of shelters.

Bipin Rai, member of the Delhi Urban Shelter Improvement Board (DUSIB), which is the nodal agency to provide temporary shelters for the homeless, said that the overall occupancy in all the 225 schools, which were converted into shelters, has been dismal. “These schools were readied after the CM announced about them on Saturday. But, very few people have come. However, our 234 night shelters, which are open throughout the year, are full and around 9,000 people use it during the night. The day occupancy of the shelters is over 7,000,” he said.