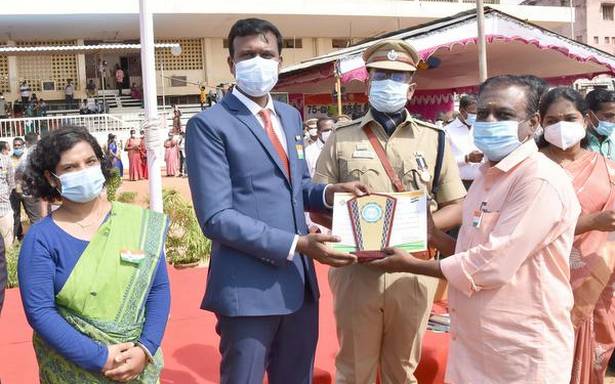 Collector V. Vishnu, after hoisting the national flag from the police grounds, inspected the guard of honour. Accompanied by Superintendent of Police P.N. Manivannan, the Collector gave away welfare assistance to beneficiaries. Special awards were presented to covid-19 warriors which included Village Health Nurses among others.

The Collector gave away meritorious awards to employees from various government departments, including police personnel, for their commendable works during the year, with a special focus on containing the covid-19 pandemic.

Due to the pandemic, gram sabha meetings across the district were cancelled. Similarly, marking the Independence day celebrations, the Collector had announced a dry day and all the TASMAC outlets were closed.

Collector K. Senthil Raj unfurled the tricolour and inspected a guard of honour accompanied by Superintendent of Police S. Jayakumar. The covid-19 pandemic had resulted in all the officials wearing the facemasks and following the protocol. On the occasion, the Collector set off colorful balloons and pigeons from the Tharuvai Grounds.

He gave away ₹ 29.92 lakh worth financial assistance to beneficiaries and presented meritorious awards to 48 police personnel, including an ADSP, three DSPs and 5 Inspectors and 150 other employees in the district.

The district administration honoured 33 tyagis and their legal heirs across the district on the occasion. Revenue officials in the respective blocks visited the dwellings and honoured them on the 75th I-Day celebrations.

Collector M. Aravind hoisted the national flag. He, after taking the salute, inspected a guard of honour in the presence of Superintendent of Police V. Badri Narayanan and presented meritorious certificates to 72 government officials at a colorful event organised at the Arignar Anna Sports Grounds.

The Collector honoured a few senior officers for their commendable works during the recently concluded Lok Sabha and Assembly elections. He also recognised drivers from the government departments who had not been involved in road accidents for 10 and 20 years. District Revenue Officer Revathi, Nagercoil Commissioner Asha Ajit, Padmanabhapuram Sub-Collector M Sivaguru Prabakaran and others participated.

Collector Gopala Sundararaj unfurled the national flag and took the salute from the ICE Boys Higher Secondary School grounds here on Sunday in the presence of Superintendent of Police Krishnaraj. The Independence Day celebrations marked the presentation of meritorious awards to the best employees from various government departments. The district administration honoured the freedom fighters at their respective dwellings owing to covid-19 pandemic prevailed.