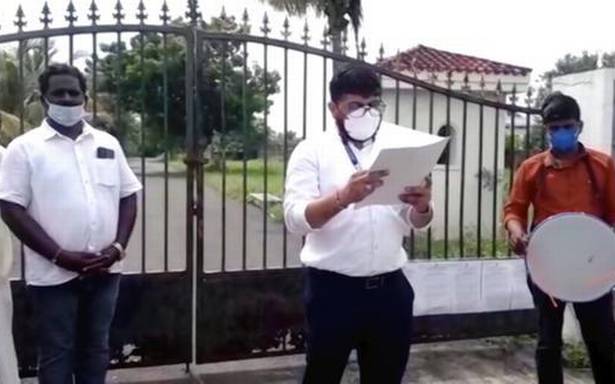 Property could be worth ₹100 crore

The Benami Prohibition Unit, Chennai, on Wednesday attached a farmhouse at Paiyanur, said to belong to V.K. Sasikala, under the Benami Transactions (Prohibition) Act.

The property, measuring 28.17 acres, located on Old Mahabalipuram Road, could be worth ₹100 crore, sources said. The officers of the Benami Prohibition Unit visited the premises near Thiruporur and stuck a copy of the provisional order at the entrance after tom-toming.

U.N. Dilip, Deputy Commissioner of Income Tax (Benami Prohibition), Chennai, said in the provisional order that the proceedings under the Act were in progress with a show-cause notice issued to Ms. Sasikala, a close associate of late Chief Minister Jayalalithaa. Given the facts and circumstances of the case, the benamidar/beneficial owner would be aware of the consequences of the proceedings. The property might be alienated during the period specified in the notice issued to the benamidar. “Therefore, it is considered expedient and necessary to provisionally attach the property…”

“It is ordered that you are hereby prohibited and restrained, until further orders or 90 days from the end of month from the date of the notice (or) whichever is earlier, from transferring or changing the property in anyway,” the order read.

Copies were also sent to the office of the sub-registrar, Thiruporur, and Jayalalithaa’s legal heirs J. Deepak and Deepa, the sources said.

This property was bought from film director and composer Gangai Amaran in 1994. At the special court which heard the disproportionate assets case against Ms. Sasikala, Mr. Gangai Amaran deposed that he knew Baskaran, son of Ms. Sasikala’s sister Vanitha. He took him to Poes Garden to meet Jayalalithaa. There he also met Ms. Sasikala. She told him that the Chief Minister had visited the Paiyanur land and liked it and she was very much interested in buying it. But he replied that the house was useful in music-composing and story-writing and he did not want to sell it. Thereafter, Ms. Sasikala’s nephew Sudhakaran talked to him daily on the phone or came to his house. Initially, his family was unwilling to sell the land but changed their mind later. Sudhakaran and some officers came to his house and got the signatures of him and his wife on October 7, 1994. They gave two demand drafts for ₹13,10,000, the court order read.

09/08/2021 India Comments Off on Farmhouse, said to belong to Sasikala, attached by officials
India