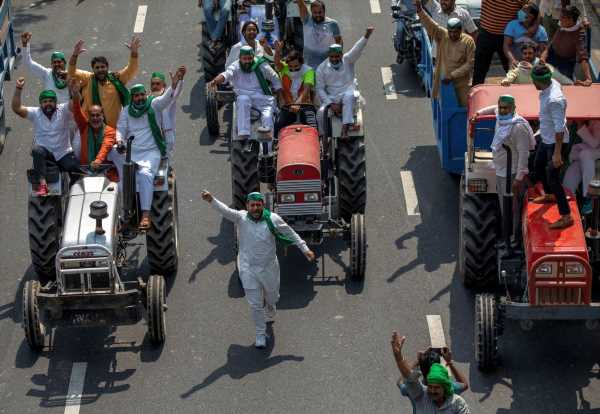 ‘If there is no outcome at Tuesday’s meeting, then on the 30th thousands of tractors and farmers will march on the Kundli-Manesar-Palwal Expressway (the only highway that is still open and gives access to the national capital).’

With the next round of talks between the Sanyukt Kisan Morcha and government representatives scheduled for December 29, the farmers’ unions are adamant that they will intensify their agitation in case the talks fail at Tuesday’s meeting.

Abhimanyu Kohar, national spokesperson of the Rashtriya Kisan Mahasangh, which is part of the SKM, tells Prasanna D Zore/Rediff.com that the time for discussions is over.

“We want to know the process of repealing these three farm laws, will be one of the four points of contention at tomorrow’s meeting with the government,” Kohar says.

A high-powered committee of the SKM will include Shiv Kumar Kakkaji from Madhya Pradesh, Daljit Singh Dallewal and Balbir Singh Rajowal from Punjab, Gurnam Singh Chadhuni from Haryana, Hannan Mollah (from West Bengal), Yogendra Yadav (Swaraj Abhiyan) along with 40 other representatives of various front farmers’ organisations.

Who initiated this meeting to break the stalemate?

We repeatedly received a number of letters from the government side asking the farmer leaders to propose a date for the next meeting. After discussing the issue among all the farmers’ organisations we proposed a meeting to be scheduled on December 29.

However, in our letter to the government we have clarified that meeting will be organised on our agenda. The government will not decide the agenda.

There will be discussions only on four points.

We want to know the process of repealing these three farm laws; there is no need for any further discussion on these three black laws. Let the government tell us about this process and the timelines for doing so.

What is the process of implementing the MSP guarantee law? How will the government go about passing such a law?

We would like to know the process of how the proposed Electricity Bill, 2020 can be scrapped, and

How the exploitation of farmers over the stubble-burning issue will be stopped?

There is no scope or space for any discussion on these four demands. At tomorrow’s meeting, we will discuss how these demands will be fulfilled.

What will happen at tomorrow’s meeting only time will tell. But we have been very categorical about our demands in the letter we have sent to the agriculture ministry. Now the ball is in government’s court. Let them decide what they can do to break the stalemate.

Where is this meeting scheduled to be held?

From the SKM side we have proposed a meeting tomorrow at 11 am. We leave it to the government to decide the place, but most probably it will take place at Vigyan Bhavan.

The SKM is yet to get the government’s confirmation for the meeting tomorrow?

We haven’t received it yet (till about noon on December 28) but we hope to receive a confirmation by this evening.

Who will be the government’s representatives for this meeting tomorrow?

This is not a valid question. We don’t know who will be meeting us from the government’s side. It is for the government to decide.

But still the question remains: Aren’t you running in circles?

From Day One (of the farmers’ agitation), our demand is very much clear. We have lost 44 farmers due to the severe cold; we are sitting on the roads. Let the government decide how they can fulfil our demands.

We have already declared that if there is no outcome in the meeting on December 29, then on the 30th thousands of tractors and farmers will march on the Kundli-Manesar-Palwal Expressway (the only highway that is still open and gives access to the national capital).

Will you be blocking this highway?

Our stance is clear. We will be marching on this highway if tomorrow’s talks fail.