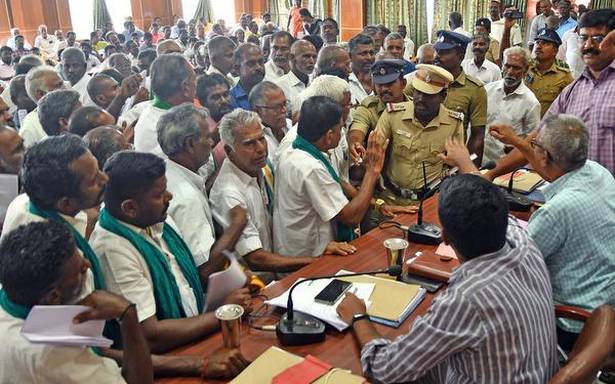 Entry of a police team into the meeting hall when the monthly grievance day meeting was being held at the Collectorate on Friday, incensed the farmers who were raising issues they were facing from an insurance firm.

At one point, they threatened to stage a walkout from the grievance day meeting when the police continued to remain inside the meeting hall.

As the meeting commenced with Additional Collector (Revenue) Vishnu Chandran in chair, the participant farmers raised the issue of the insurance firm that reportedly chased them away with the help of police when they had gone to its office premises on Victoria Extension Road, recently. Since the insurance firm, which has received the premium for crop insurance, is yet to disburse the benefits to the agriculturists after crop loss, the farmers had gone there recently to get explanation from them for the delay.

Moreover, the firm is also yet to link the farmers’ accounts they had with the rural banks, which is another reason for the delay in the online payment of insurance benefits.

“After taking the premium from us, the insurance company is chasing us away with the help of police when we went to their office premises to get information about the delay in the disbursal of insurance benefits. The meeting should discuss this issue first before taking-up the agenda,” the farmers demanded in one voice.

The official representing the insurance firm explained that they had not pressed the police to chase the farmers away. “Since the farmers had gathered there in large number, it caused a traffic snarl on the road and hence, the police, who had come to the spot on their own and without any information from us, moved the farmers away from the place,” he said, which prompted the farmers to raise their voice.

As pandemonium prevailed in the meeting hall for a while, the policemen, who would usually be deployed on the Collectorate premises, entered the meeting hall. The farmers got agitated, saying that the bureaucrats were attempting to stifle the farmers’ voice with the help of police.

“While the insurance firm is intimidating us with police force, the district administration is also threatening the farmers by inviting the law-enforcers into the meeting hall when we air our genuine grievances. Is it the sign of democracy or ‘police raj’?” the farmers started shouting even as Collector Sandeep Nanduri entered the meeting hall at 11.45 a.m. after attending a few functions scheduled earlier.

Pacifying the agitated farmers, Mr. Sandeep brought back normalcy in the meeting hall as the police left the spot.

He also said the officials had collected 342 fertiliser samples and 581 pesticide samples for analysis to check the quality.

On the payment of insurance benefits, Mr. Sandeep said ₹2.14 crore had been paid in the accounts of beneficiary farmers during 2018 – 2019 and 76,494 corn farmers had received the benefits to the tune of ₹118.94 crore.