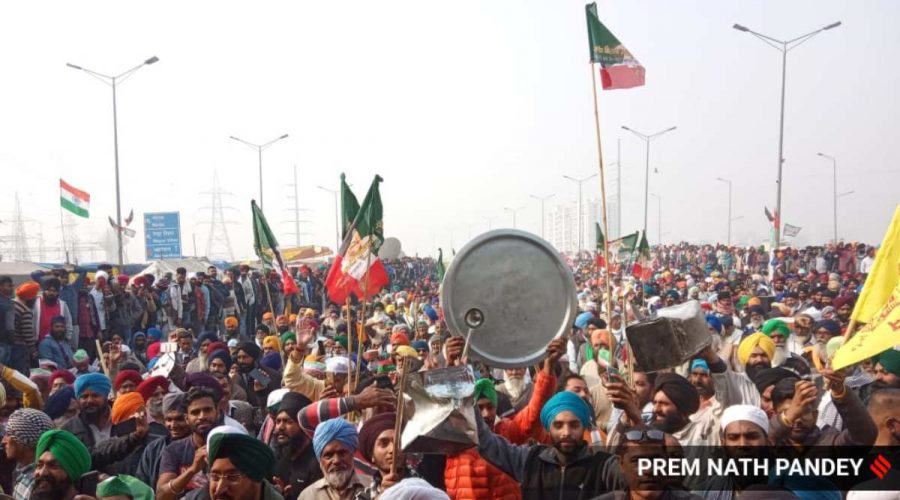 Farmers’ Protest Live News updates: Delhi Chief Minister Arvind Kejriwal is scheduled to visit the Singhu border on Sunday evening to attend ‘Safar-e-Shahadat’ Kirtan Darbar organised by the Delhi government and is also expected to meet the protesting farmers camping there for over a month now.

Earlier in the day, Jalalabad-based lawyer Amarjeet Singh Rai consumed poisonous substance at Tikri border. He was rushed to PGI, Rohtak, where he was declared dead on arrival.

Meanwhile, as the stir against the agriculture reform laws entered its fifth week, Union Defence Minister Rajnath Singh said the Centre never intended to scrap minimum support price (MSP) and no ‘Mai Ka Lal‘ could take away land from the peasants. The Union minister added that the new laws would raise the income of farmers, but the Congress was misleading them. “The income of farmers will double with the enactment of farm laws. It takes some time to see the impact of comprehensive reforms,” he said.

Farmer unions in Haryana announced that they would continue to allow toll-free movement of vehicles on highways until the Centre accepted their demands. In other news, Singhu and Ghazipur borders saw a noisy morning on Sunday, with the farmers banging thaalis during Prime Minister Narendra Modi’s monthly ‘Mann Ki Baat’ radio address.

As the protests against the Central government’s contentious new agricultural reforms continue to intensify in the national capital, large groups of farmers at the Singhu and Ghazipur borders Sunday began banging utensils during Prime Minister Narendra Modi’s monthly ‘Mann Ki Baat’ radio address. On Sunday morning, large processions of farmers camping along Delhi’s borders were seen marching, while striking utensils and chanting slogans against PM Modi and the Central government.

Meanwhile, as the Centre government announced release of Rs 18,000 crores as a part of the last installment of Rs 2,000 each in the accounts of 9 crore farm households under the PM Kisan Samman Nidhi Scheme, several farmers said that amount may be huge, but one should see what is coming to every farmer. They asked how it will compensate them for their billions of crores in losses suffered every cropping season due to denial of assured price for their crops.

Farmers insisted that they needed an assured price for every crop instead of being treated as “beggars”.

“In our village there are small and marginal farmers with half acre to 5-acre land mostly. I also have half acre land out of which I get around 10 quintals paddy as on an average from one acre we get 20 quintals paddy yield here but from local trader we get only Rs 900 to Rs 1000 per quintal and when we take our crop to Gulab Bagh mandi, one of the biggest mandis in Bihar, where traders from Punjab come and procure our crop at the rate of 1,200 to 13,00 per quintal and then they bring that to Punjab via trains and trucks and sell in Punjab’s mandis at full MPS Rs 1,888 per quintal,” said Parkash Bihari, a farmer and labour contractor. Parkash, who hails from Bihar’s Madhepura district, comes to work in Punjab’s fields and mandis during wheat, paddy and potato season along with several labourers.