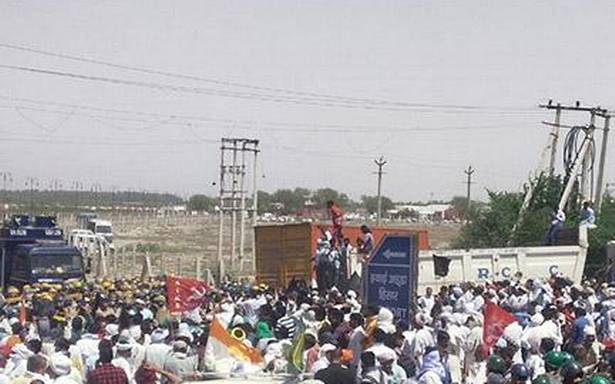 Haryana Deputy Chief Minister Dushyant Chautala faced the ire of agitating farmers during his visit to Hisar on Thursday when hordes of protesters, including women, blocked the exit to the city’s airport for around two hours, not allowing him to come out of the premises.

Eventually, Mr. Chautala landed at Haryana Agriculture University campus in his chopper before going ahead with the day-long trip. The farmers continued to chase him to different venu-es all through the day before he flew back to Chandigarh.

The protesters owing allegiance to different farmer unions and workers of trade unions gathered outside the city’s airport around noon. “The farmers parked tractors, trolleys and trucks on the road connecting the highway to the airport, completely blocking it. When the farmers did not budge, Mr. Chautala flew to the HAU campus. He then went ahead with his official programme at the mini-secretariat,” said Suresh Kumar, district president, Centre of Indian Trade Unions. Mr. Chautala’s chopper flew in the direction of Chandigarh to mislead the farmers, but took a detour to reach HAU, said Mr. Kumar. The farmers showed black flags as Mr. Chautala’s as his chopper flew over them.

“He hurriedly finished the inauguration programme at the mini-secretariat before the farmers could reach there and left for a wedding in the city. The farmers then gathered outside his residence in Urban Estate, but he did not turn up,” said Mr. Kumar.

All-India Kisan Sabha vice-president Inderjit Singh said the BJP-JJP alliance should read the writing on the wall from the extent of their isolation from the socio- political life of Haryana. “How long can they sustain by antagonising the entire rural Haryana,” asked Mr. Singh.

A senior district administration official, not willing to be identified, said a few people protested but they could not hamper the official programme. The official added that Mr. Chautala completed all his programmes, inaugurating a few projects and laying the foundation stones.