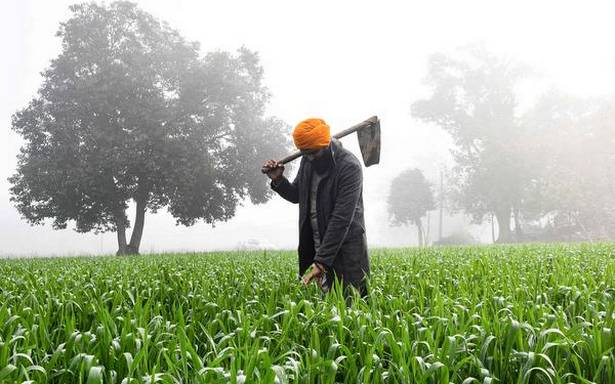 The 13-month-long farmers’ agitation against the Narendra Modi government is not a talking point in this Punjab election. Having won the battle against the government’s attempt to corporatise agriculture, farmers now face a bigger fight against rising agricultural input costs.

At Ughrahan village, home to the Bharatiya Kisan Union (Ekta Ugrahan)’s Joginder Singh Ughrahan, who became a key face of the agitation, Jat Sikhs farmers had gathered together in the winter morning sun to exchange news when The Hindu met them.

“Tel mehenga, dawai mehengi, kisan nu bachta ki hai (fuel and fertilizer are both expensive, farmers are left with very little at the end of the day),” 45-year-old Sadhu Singh said. Others also joined in the chorus, each competing with the other to list out everyday commodities that cost more today than they did in the last five years. One farmer said gas cylinder cost is up from ₹450 to ₹900-1,100; diesel is hovering close to ₹100 per litre — a nearly 40% increase; and barring urea, the cost of fertilizers had doubled. There is an overwhelming feeling of despair over the political class’s indifference to bread and butter issues.

“They claim that farmers don’t have to pay taxes. We pay taxes from the time we wake up to when we sleep. I pay tax on electricity that runs the fan, I pay tax for the tap that pours out water, I pay tax on the sugar that goes in the tea. The question, is where do these taxes go? Manpreet Badal [Punjab’s Finance Minister] claims every now and then that the State treasury is empty,” farmer Mahendra Singh said.

The group laughs when one of them twists the Congress slogan — “Channi ki chali gal; Ghar, ghar da masla karein hal” (CM Channi will solve every house’s problem) to “Congress chali hun Bhajpa warg” (Congress is now toeing the BJP line) — the two national parties and their allies, present and erstwhile by association, they are just the same.

Mr. Ugrahan on his part has refused to back any of the political parties in the fray and has strongly opposed both the SSM and SSP. “Our movement will remain a milestone. The formation of these parties is definitely a stain on the movement’s image, but it does not mean the end of the Samyukta Kisan Morcha. They wanted to contest the elections, so let them. They won’t make a dent and will eventually return to our fold,” he told The Hindu.

The three main parties — Congress, Shiromani Akali Dal (SAD) and the Aam Aadmi Party (AAP) — may only be different marginally in their policy and vision, he says. “It is up to the voters to choose the lesser evil between these,” he adds. And in this case, the lesser evil can be the only one that hasn’t been tried so far.

Some 55 km away, at the Barnala Assembly Constituency, the SSM has fielded 35-year-old Abhikaran Singh. Unless asked, voters don’t speak about the candidate or the party. Even when they do, they don’t have a good word to say. “The Delhi agitation cannot be appropriated by any individual or union. We all contributed to it. It’s simply wrong for a few of them to use the agitation for votes,” Balwinder Singh said at Kothe Surjeetpura in Barnala constituency. Over the 13 months, Mr. Balwinder Singh had spent many weeks at the Tikri border along with other agitating farmers.

In Bhatinda Rural Assembly constituency, the SSM has fielded Baba Chamkaur Singh. Not many in the constituency have heard about him. Depending on the ideological inclination of the respondent, the contest is either between the AAP and Akalis, or the AAP and the Congress here. The SSM is not even in the race.

Along with State politics, in the narma or cotton belt of Mansa and Bhatinda, a pest attack of gulabi sundi or pink ball worm that has infected crops is the main point of discussion — the insidious worm quietly makes itself comfortable inside the cotton bulb while the crop looks healthy from outside.

At the Kot Shamir village in the Bhatinda Rural Assembly constituency, The Hindu met brothers Gurcharan, Sukhmander and Ramandeep Singh. Standing next to harvested cotton crop, Mr. Gurcharan opens one of the bulbs to explain the attack by the worm. The innards of the bulb, instead of having a cloud of pristine, white cotton, are black and eaten out.

Mr. Gurcharan is a big farmer, so it’s a loss from which he can recover but he explains that for landless farmers who work with leased lands, this kind of setback could be life-altering. “After paying the rent and the other input costs, a farmer can save only ₹10,000 per annum per acre. In one acre, we usually get close to 10 quintals of cotton but this time, because of gulabi sundi, we got only 1.5 quintals [per acre]. So against an input cost of nearly ₹40,000, we made only ₹6,000,” he explained. The government provided a compensation of only ₹15-17,000.

The brothers are not convinced that either the SSM or SSP will make a difference to farmers. “Did the Modi government back down on the farm laws because the Akalis resigned from the Cabinet and walked out of the alliance? No! Were the laws scrapped because of Congress protests? No! It was our unity as farmers that brought the government to its knees. The primary reason was that we were not an electoral entity,” Mr. Sukhmander Singh said. The farm-based parties, he said, will be as ineffective as traditional parties in dealing with agricultural issues.