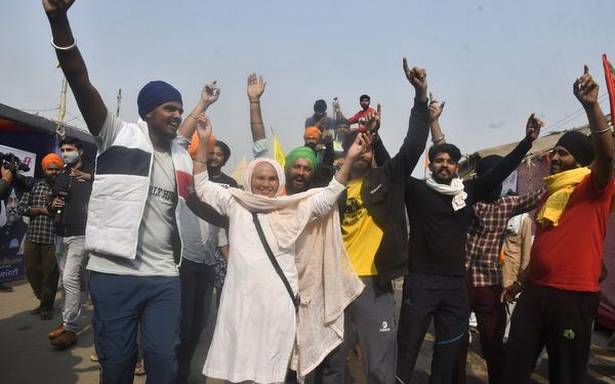 Hours after Prime Minister Narendra Modi announced the repeal of the three contentious farm laws on Friday, celebrations broke out among jubilant farmers who have been agitating at the Singhu border for almost a year now.

The farmers’ protest will complete a year on November 26.

“Kisan Andolan Zindabad” slogans were being raised with renewed vigour across the protest site by farmers atop tractors blaring Punjabi songs, even as congratulatory messages and greetings kept pouring from visitors and well-wishers throughout the day.

The fact that the fruit of their year-long struggle against what they called the “black-laws” came on Gurpurab, a day when they celebrate the birth anniversary of Sikh’s first guru, Guru Nanak, has added to the joy. However, farmers said that though the Prime Minister announced the decision on live television, they were not prepared to trust his word and would continue with their protest till the three laws were repealed by Parliament and they were given a guarantee on a Minimum Support Price (MSP).

Muneesh Sehgal, hailing from Kalhana in Punjab, said that after holding the agitation for almost a year during which several of his farmer-brothers had died, he wouldn’t believe any oral declarations until he actually saw them implemented. “It’s good news for us, but we are sceptical. We have sacrificed way too much and have been away from our villages back in Punjab…we won’t return so easily trusting the PM,” he said.

Sehgal said that he received the good news from his family back home and was elated at first. “It’s the auspicious day of Gurpurab for us and we feel vindicated. The news spread like wildfire, all of us excitedly passed on the message. But the plan ahead is not to step back, and see the decision actualise,” he added.

Explained | How to repeal a law?

Sarabjit Singh from Batala in Punjab said that even though there was a sense of jubilance, “we won’t carry out the real celebrations just yet and wait for the next course of action”.

“Around 700 of our farmer brothers have lost their lives, their souls will not attain salvation till we actually get the agri-laws repealed… we don’t trust the PM,” Singh said. “No one will remove us from here and we are not returning to our village, we are ready to hold our agitation for many years,” he added.

Barjeet Singh, from Sangrur in Punjab, said that there was a sense of happiness and relief among the protestors, but it will be incomplete if things are not taken to their logical end. “I got the news early in the morning and it was like a festival for us,” he said.

“There is undoubtedly a little happiness and all of it has happened due to our struggle and resolve to not step back despite the challenges… once the laws are repealed by Parliament, only then will we do bhangra and celebrate our victory… it is better to wait and watch now,” Meje Singh, from Batala, said.

Uttam Singh, also from Batala, said: “The fact that the PM had to announce the repealing on TV indicates that the efforts of the elderly and the women protestors have had an impact to shake the government’s conscience”.

He added, “We have disregarded scorching summers and chilly winters in the hope that we will see the black laws being taken back, and today there is a sense of victory.

“But it is only a battle half-won, there is a long way to go.”