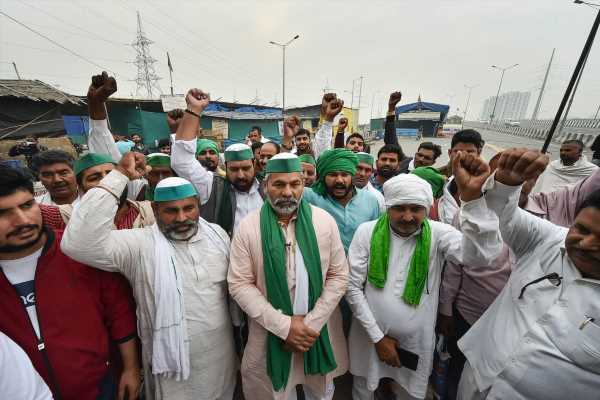 In the unlikely event of the BJP-NDA losing all five states going to the polls in February-March, the Presidential electoral college numbers could be significantly altered, points out N Sathiya Moorthy.

Unlike generally believed, Prime Minister Narendra Modi’s surprise announcement on farm laws withdrawal may have as much to do with the election of the new President (July) and vice-president (August) as the seven-state assembly polls, all of which are due next year.

Of course, the timing of the announcement has more to do with assembly polls in five of the seven states in particular, whose effect also has the potential to united the divided Opposition to come together to fight the ruling Bharatiya Janata Party for the President and his deputy.

As the schedule would have it, assembly elections in farm laws-bitten Punjab, populous Uttar Pradesh, Uttarakhand, Goa and Manipur are all due by February/March, well ahead of electoral college-based polling to elect a new President and vice-president respectively.

In Himachal Pradesh and Modi’s native Gujarat, assembly polls are due in November/December.

In the unlikely event of the BJP-National Democratic Alliance losing all five states going to polls in February-March, the Presidential electoral college numbers could be significantly altered.

Whether such an eventuality could lead to Modi-led BJP not having a President of its choice is a remote question just now.

But the party and leader cannot afford a downtrend, well ahead of the Lok Sabha polls that are not due before the first half of 2024.

The likelihood of all Opposition parties, including the Congress, coming together are as remote as the BJP not being able to retain the Presidency and the vice-presidency.

This would be so, whether or not the BJP loses the five-state assembly elections earlier.

But the BJP cannot afford to take chances and risks as could have been the case ahead of the multi-state byelections earlier this year.

The party lost most assembly seats to a divided Opposition, and could won only one of the three Lok Sabha seats.

Thus far, the BJP can be sure that it has lost all of the ‘minority votes’ in the country, comprising Muslims, Christians and now also Sikhs.

The uncharitable attempt by a section of the pro-Modi social media activists to dub the farmers’ lobby as a product of Khalistani plot and a ploy to destabilise the nation should have alienated the Sikh community already.

The prime minister’s declaration that he did not want a community alienated, thus comes long after such alienation.

Of course, the Modi-Shah duo can still count on the continuing infighting in the Punjab Congress and sacked party chief minister Amarinder Singh floating a new party to deliver the goods for the BJP. Or, is the signals from the ground any different?

Over and above the consolidated minority vote-bank that however is divided on anti-BJP electoral loyalties, there may now be a farmers’ constituency, to which religious identities may not stick as much as the BJP would want now.

But then, the more recent opposition to a gurdwara in Haryana’s Gurugram withdrawing permission for Muslims to say their customary Friday prayers on its premises, and such other popular diktats against Friday namaaz in public places, including roads, again in Haryana for now, can divide, not unite…

In context, the perception that a brand new Ram temple at Ayodhya in time for the Lok Sabha polls in 2024 may not be realistic.

Elections-1991 was the ‘Ram election’, but the BJP could not make it after the demolition.

Now, the temple is a reality for all Ram bhakts.

For hardcore Hindutva voters, the temple is a politico-electoral aspiration.

But they are already there, but the party would want new voters to offset possible losses caused by inevitable anti-incumbency of the farmers kind.

Unlike the temple, which still holds sentimental value for most Hindus, Modi’s other pet project in the Central Vista-centred new capital plan in New Delhi, has the potential to rebound, electorally.

He and his social media camp-followers have distanced themselves so much from nationalism of the freedom movement kind that ‘swing voters’ who stood by him in 2014 and 2019 may abhor the Central Vista as a costly aberration, which they cannot relate to.

The emergence of a loosely-knit farmers constituency has another message, which has been at the centre of the nation’s ‘rally politics’ since Modi became chief minister.

Like in the case of the anti-CAA protests, mainly of minority Muslims, and the ‘JNU students’ protests, supposedly anti-BJP and Left-leaning, the Hindutva groups could not convince themselves and the rest about the political identity of the frontline leaders after a point.

The other related to identity of different kinds, but this one owed to livelihood, which is all-consuming.

Of course, there is little or no chance of the farmers protest throwing up the equivalent of the ‘India Against Corruption’ lobby under the forgotten Anna Hazare, whose politico-electoral beneficiary Delhi Chief Minister Arvind Kejriwal became.

Coupled with the nation-wide ‘Nirbhaya protests’ against the Delhi gang-rape with, yes, JNU students taking the lead, the Kisan Baburao ‘Anna’ Hazare movement did benefit the BJP and prime ministerial candidate Modi immensely.

The ruling Congress under prime minister Manmohan Singh lost the narrative, and almost for good.

The other proven comparison, though at a limited level, is the ‘Jallikattu protests’ in southern Tamil Nadu, in January 2017.

The faceless organisers, who gathered a million and more only through the social media, would not allow politicians anywhere near any of the protest venues, which lasted for about 10 days.

Before it, there was the Singur/Nandigram protests in West Bengal, from which TMC’s Mamata Banerjee capitalised on electorally against the entrenched CPI-M.

Alongside, there were the all-but-forgotten anti-SEZ farmers’ protests and anti-mines environmental agitations in many parts of the state.

Unlike in West Bengal (TMC) and Tamil Nadu (DMK), where the political Opposition was waiting in the wings to capitalise electorally from what still essentially was a non-political people’s protest, there is none out there, especially at the national-level to try and benefit from the after-effects of the farmers’ protests.

Elections-2019 proved the inadequacies and consequent inability of the Congress rival to the BJP, in this regard.

The reason is obvious. The Congress has long since been reduced to the status of a ‘regional party with a national identity’, with a substantial base only in the western region, from Himachal Pradesh down to Karnataka and Kerala, with Rajasthan, Gujarat, Maharashtra, all of the along the Arabian Sea, with Madhya Pradesh and Chattisgarh thrown in to break the coastal monotony.

Worse still, no other party in the rest of the country, barring the ruling DMK in southern Tamil Nadu, wants the Congress for an ally.

After learning its lessons in alliance politics by allotting more seats than Congress could have won in the 21st century, the DMK under M K Stalin was tough in negotiating seat-sharing with the national ally, both in Elections-2019 and Elections-2021.

The results are for other prospective allies elsewhere and also the Congress high command, to re-negotiate the latter’s position in the overall regional electoral scene and context.

It was easier for Sonia Gandhi to accept the ground reality better when the party was relatively stronger, first after she took over the Congress’s reins in 1996 and then in 2004, than it is for the Rahul-Sonia duo to do so when it has become even more critical for the party and the family.

Still the question remains. If the BJP is anxious enough for the prime minister to compromise on his well-heeled political prestige and personal estimation to withdraw the farm laws now, can the divided Opposition capitalise on the ruling party’s self-acknowledged poll predicament?

For the BJP in turn, after Modi’s go-slow on the National Population Register, which his followers did not want to acknowledge, the withdrawal of the farm laws (whether good or bad) is yet another loss of electoral face.

This will be the undercurrent in which Elections-2022 would be fought, and the results would dictate the course to Elections-2024, too.

But then, the BJP and Modi would still have an ace up their sleeve — of providing political stability as none else after Indira Gandhi’s famed pre-Emergency stint, which ended decades ago in the mid-seventies — and which the BJP is shy of projecting for poll purposes, for reasons best known to the party!