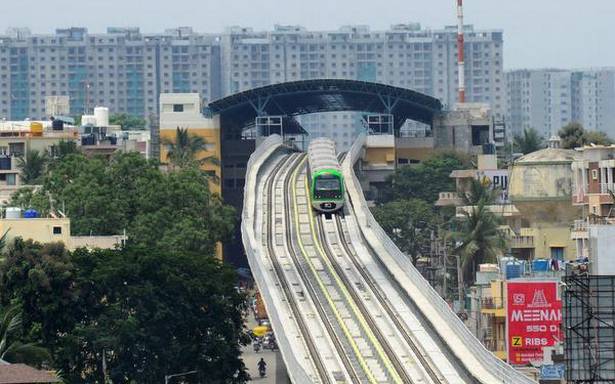 After missing several deadlines, Bangalore Metro Rail Corporation Ltd. (BMRCL) has finally fixed a date to start commercial operations of the extended metro line on Kanakapura Road. The line from Yelachenahalli to Silk Institute (earlier referred as Anjanapura) will be inaugurated on January 14. It will be thrown open to the public the next day.

It will be the first metro reach under phase II slated for commercial operations.

Chief public relations officer of BMRCL Yashvanth Chavan said that Hardeep Singh Puri, Minister of State (independent charge), Housing and Urban Affairs, will virtually inaugurate the metro line from Delhi. Chief Minister B.S. Yediyurappa will also take part in the event by flagging off a train. “Usually, when an inauguration is scheduled in the evening, the commercial operations start from the next morning,” Mr. Chavan said.

The official said that the existing fare structure will continue. The 6-km metro stretch on the Green Line has five stations: Konanakunte Cross, Doddakallasandra, Vajrahalli, Thalaghattapura, and Silk Institute.

Once the extension is open to the public, the total length of the operational Green Line will be 30 km.

Under phase I, BMRCL had built the Green Line from Yelachenahalli to Nagasandra, with a total length of 24 km.

Under phase II, BMRCL is also extending the Green Line from Nagasandra to BIEC on Tumakuru Road.

BMRCL initially planned to open the extended line for public use in 2018. With delays, it fixed one deadline one after another but failed to start commercial operations. Last year, BMRCL had planned to open the line in August 2020, but it was once again postponed due to COVID-19 and other factors.

This year, one more reach is likely to open for commercial operations: Mysuru Road to Kengeri line, which is an extension of the Purple Line. It’s expected to be opened to the public in May. This was the first line taken up for construction under phase II in October 2015.