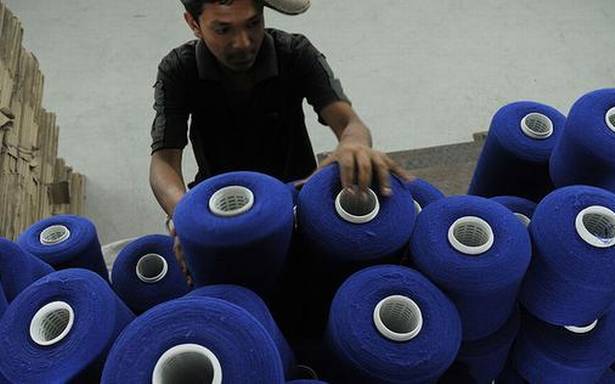 The rebates range from 0.5% to 4.3% of the FOB value of outbound consignments

The government on Tuesday notified the rates and norms for the Remission of Duties and Taxes on Exported Products (RoDTEP) scheme, with Commerce Secretary B.V.R. Subrahmanyam asserting it would put some ‘direct cash in the pockets of exporters’ soon.

The RoDTEP scheme had kicked in from January 1, after the earlier Merchandise and Services Export Incentive Schemes (MEIS and SEIS) were scrapped as they were found to be impermissible under the World Trade Organisation norms.

A budgetary allocation of ₹12,454 crore has been made for 2021-22 under the scheme which covers 8,555 tariff lines, accounting for roughly 75% of traded items 65% of India’s exports. To enable zero rating of exports by ensuring domestic taxes are not exported, all taxes, including those levied by States and even Gram Panchayats, will be refunded under the scheme.

The rebates under the scheme which Director General of Foreign Trade Amit Yadav said is WTO-compliant as per legal advice, range from 0.5% to 4.3% of the Freight On Board value of outbound consignments. The lowest rate has been offered on items such as chocolates, toffees and sugar confectionary, while yarns and fibres have been granted the highest rate.

“Steel, pharma and chemicals have not been included under the scheme because their exports have done well without incentives. There are a couple of more schemes in the pipeline to help exporters, but RoDTEP, which is valid till March 31, 2024, will be our flagship scheme,” said Mr. Subrahmanyam.

The top trade official also assured of a resolution of the pending dues under the MEIS and SEIS by the first week of September, through a ‘staggered’ mechanism.

The government is hopeful clarity on the export rebate rates and issuance of scrips for outbound trade since January 1 will free up working capital for exporters and help achieve the $400 billion target for the year. However, exporters’ bodies were cautious.

Engineering Exports Promotion Council chairman Mahesh Desai said the RoDTEP rates had not taken into account taxes embedded in their raw materials like steel and thus, only partially compensated for the unrebated taxes while a huge portion of the taxes on the raw-material stage would be exported abroad.

“The reimbursement of embedded duty in export items was much needed as it will help the exporters to secure more orders from overseas,” he said, calling for greater policy support to achieve the sector’s target of $107 billion for this year.

“We hope that in future these rates will be revised to reflect the actual duty and taxes suffered by the industry and more sectors would be covered along with exports made under Duty Exemption Schemes, EOUs, SEZs and bonded warehouses, who all suffer the hidden and unutilised duties,” said PHD Chamber of Commerce and Industry president Sanjay Aggarwal.

08/17/2021 India Comments Off on Exporters to get duty relief as part of Jan. 1 RoDTEP scheme
India