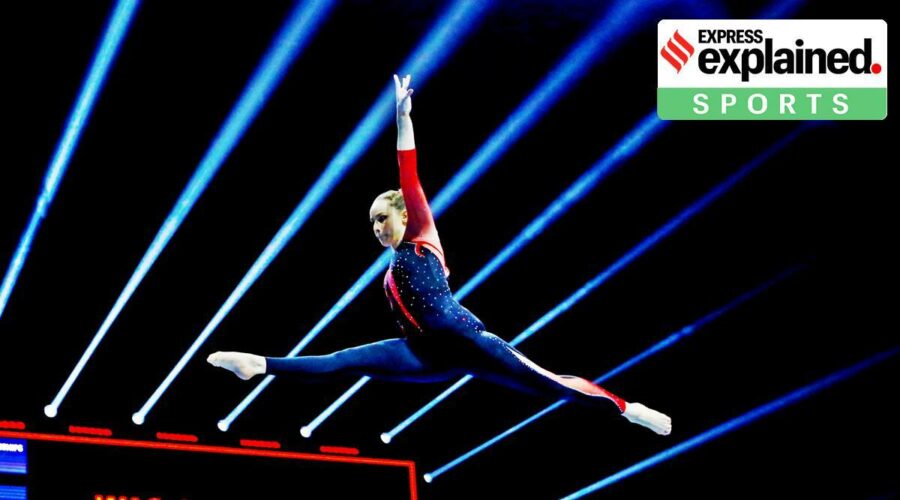 The sport has gone through a torrid churn in the last few years after it was revealed that a team doctor of the champion US women's team, Larry Nassar had sexually abused several young women. German gymnast Sarah Voss opened at gymnastics’ European Championships wearing a black ankle-length bodysuit with riffs of red, a departure from the short-leg leotards that are the norm on the Artistic Gymnastics apparatus.

The move to a form-fitting full-length performing gear was welcomed as a liberating change by female gymnasts who have had to grin and bare in the uncomfortable leots, under intense spotlight.

What did Sarah Voss do at the European meet at Basel?

The German national all around champion, who events in balance beam, floor exercise and uneven bars, turned up for her routine in a body-suit which is allowed in the rules, but not worn by international competitors who prefer the full-sleeved swimsuit-like leotards. While Voss said she wanted female gymnasts to feel good in their skin, it was a strong message intended to go out that women were done with their bodies being ‘sexualised’ in the sport under the garb of aesthetics. “We decided to show that a gymnast can be elegant, strong and expressive even when wearing a full suit. It shouldn’t be a problem to deviate from the normal, the important thing is to feel good about yourself,” Voss said.

Why is this pathbreaking in women’s gymnastics?

The sport has gone through a torrid churn in the last few years after it was revealed that a team doctor of the champion US women’s team, Larry Nassar had sexually abused several young women. Similar revelations of varied degrees emerged from other parts of the world, with cruel coaching, bullying and body-shaming being rampant at the top levels of sport. The German federation took the earliest steps to tackle this head-on working on a key aspect of the sport – what women wore in competition, under the guidance of long-time trainer Ulla Koch. Swiss paper BZ Thuner Tagblatt quoted 21-year-old Voss as saying, “We tried a lot of options: shorts, three-quarters or ankle-length (her preference). It’s super comfortable and stretches your legs. With shorts your legs look a bit unbalanced. Because very thin material is used, the grip is not a problem on somersaults.”

Why is Elisabeth Seitz an important figure in this movement?

Voss’s older teammate has been a vocal critic of the short leotards, and went through a nightmarish time when she scrolled through her pictures on the internet, fearful of a photo angle that were exploitative. “If only a little something slips, then everyone sees more than they should see,” Seitz told SWR in Basel, hopeful that there’d be many who would feel comfortable about their postures in long-legged suits, safe in knowledge that “the suit can no longer slip in places where nobody is looking should.”

“It’s not about us saying that now every gymnast should cover herself and no longer show her skin. As a team, it’s about showing that you can dress like you want. But the sport is still great, while you can feel even more comfortable than in a short leotard,” she emphasized on the message going out to young girls in the sport. “This was setting an example that anyone who wants to take advantage of the opportunity could do it. Wearing this is allowed.” While she was mortified about a sexist photo floating on the internet, she’d have preferred instead to focus on somersaults on the balance beam, upside downs through the air or the split jump. “It’s actually about top athletic performance. Nice gymnastics has nothing to do with the fact that you think these pictures are awesome,” she had raged.

How have other gymnasts reacted?

Former Swiss gymnast Ariella Kaeslin told SonntagsZeitung how her generation had struggled to wear shorts even in training: “I would have often wished I could wear more. Gymnasts are extremely exposed. The judges are close at the beam, and for some figures you spread your leaping legs full throttle in front of the judges. That’s uncomfortable. That always bothered me.”

“Fantastic” chimed in Canadian Ellie Black, while Georgia Godwin wrote “I love this,” within minutes of the picture of the full length black suit going up on social media. Swiss Giulia Steingruber it looked “really elegant.”

What about other sports?

A large part of an inspiration for the German federation came from Serena Williams wearing the catsuit at the French Open. The opposition to it seemed to have made the Germans more determined to develop something that the women themselves felt comfortable with. Beach volleyball players traded bikinis at a tournament in Doha for slacks and a bustier – in another sport guilty of enabling the male gaze when it came to attire. Sonja Zimmermann, an ice hockey player for Mannheim HC, who winced at the social media comments following a picture of hers in a deep cut shirt in 2019, had to tide over the embarrassment and bring in a tailor to shorten the straps. Enforcing skirts is a major contentious point in most sports, facing deserving backlash.

What are the issues specific to gymnastics?

While most gymnasts slip into leotards when they start out as early as 4, girls undergo puberty growth which sends them into a massive bout of fear as the short suits upto the groin can seem uncomfortable. Teens have been known to quit on the sport, unwilling to go through body-shape expectations – a wrench on account of the leotard. Social media has exacerbated these fears of pictures being misused. The sexual abuse scandal in America had put several gymnasts in direct harm’s way – the last straw.

Why will bodysuits become popular anyway in Gymnastics?

Teen gymnasts like American sensation Jordan Chiles and Lauren Hernandez have raised the fashion quotient chanelling superhero suits like Captain Marvel’s geometrics and Wonder Woman’s gold second skin into leotard designs. New age feminity in gymnastics underlines strength and self assurance and these Marvel and DC characters with their sleek body armour-meets-athleisure comfort form fits are replacing the prettied up ribbons and sequins of earlier champions. Scarlet Witch, Falcon, Wakanda’s Dora Milaje, Kung fu master Shang-chi are expected to be favoured themes for young confident gymnasts asserting their independent streak this season. All superhero suits lend themselves to the full body gear, and the no-nonsense combat look might well replace the awkward leotards.

04/24/2021 India Comments Off on Explained: Why women gymnasts are bringing a major shift in how athletes dress
India