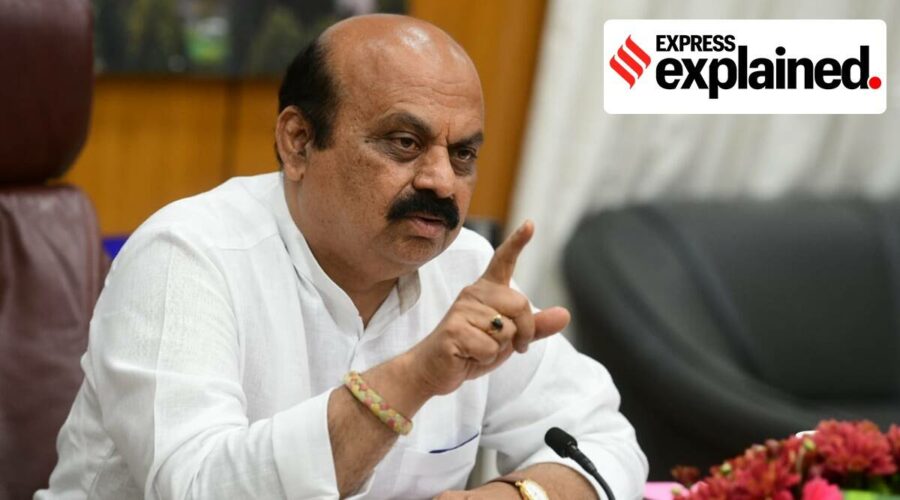 Besides appeasing pro-Kannada bodies, the state government’s move is also meant to prevent any association of the region with the erstwhile Bombay Presidency while humouring the Lingayat community. On the day of the 66th Karnataka Rajyotsava on November 1, Chief Minister Basavaraj Bommai announced that the Mumbai-Karnataka region will be renamed. “There is no point in retaining the old name when border disputes often emerge. We had recently renamed the Hyderabad-Karnataka region as Kalyana Karnataka. We have now decided to rename the Mumbai-Karnataka region as Kittur Karnataka,” Bommai had said. Pro-Kannada organisations in the state had long raised the demand to rename the region that had been under the erstwhile Bombay Presidency before Independence.

By rechristening Mumbai-Karnataka as Kittur Karnataka, the BJP government also meant to dissociate itself from any ties with the erstwhile Presidency or colonial-era nomenclature in regions that came under the newly formed state of Karnataka in 1956.

“Border disputes started after the unification of Karnataka. Although those disputes have now been settled, quarrels break out from time to time… What is the point in calling north Karnataka region as Mumbai-Karnataka anymore” Bommai had said.

The renaming is also to detach itself from any ties with Maharashtra. Every year during the Kannada Rajyotsava celebration on November 1, the Maharashtra Ekikaran Samiti (MES) observes a black day in that state as well as in Belagavi as they claim that parts of Belagavi were forcibly separated from Maharashtra during the reorganisation of states along linguistic and administrative lines in 1956.

Maharashtra has staked claim to an area of over 7,000 sq km along its border with Karnataka, comprising 814 villages in the districts of Belagavi, Uttara Kannada, Bidar and Gulbarga, and the towns of Belagavi, Karwar and Nippani. Maharashtra wants to annex all these areas.

The erstwhile Bombay Presidency, a multilingual province, included present-day Karnataka districts of Vijayapura, Belagavi, Dharwad and Uttara Kannada. The States Reorganisation Act of 1956 made Belagavi and 10 talukas of Bombay State a part of the then Mysore State (which was renamed Karnataka in 1973).

The name Kittur comes after a historical taluk in north Karnataka’s Belagavi district that was ruled by Rani Chennamma (1778-1829). Kittur Rani Chennamma had fought against the British about 40 years before Jhansi Rani Laxmibai.

One of the reasons BJP has decided to name the region after ruler Kittur Rani Chennamma is because she is from the dominant Panchamasalis, the largest sub-sect within the Lingayat community. Sources in Karnataka BJP say this could also be a move to mitigate ongoing tensions between the BJP government and the Panchamasalis who have been demanding to be included in the 2A-OBC category of the reservation list for a few months now.

In 2019, the previous BS Yediyurappa-led BJP government renamed the Hyderabad-Karnataka region as Kalyana Karnataka. The region was under the Nizam of Hyderabad even after Independence as the last Nizam, Mir Osman Ali Khan Bahadur, refused to let his kingdom be annexed with the Indian Union. On September 17, 1948, it was merged with the Union of India after police action under the leadership of India’s first Home Minister Sardar Vallabhbhai Patel forced the Nizam and his army to surrender. The region comprising Bidar, Ballari, Kalaburagi, Koppal, Raichur and Yadgir has been accorded special status under the Constitution (Article 371J) owing to its backwardness.

The name Kalyana comes from the Kingdom of Kalyana, which was the epicentre of the 12th-century Sharana movement and the Vachana Sahitya preached and followed by Basavanna, a Lingayat saint and seminal figure in the Bhakti movement.

11/13/2021 India Comments Off on Explained: Why has Mumbai-Karnataka region been rechristened as Kittur Karnataka
India