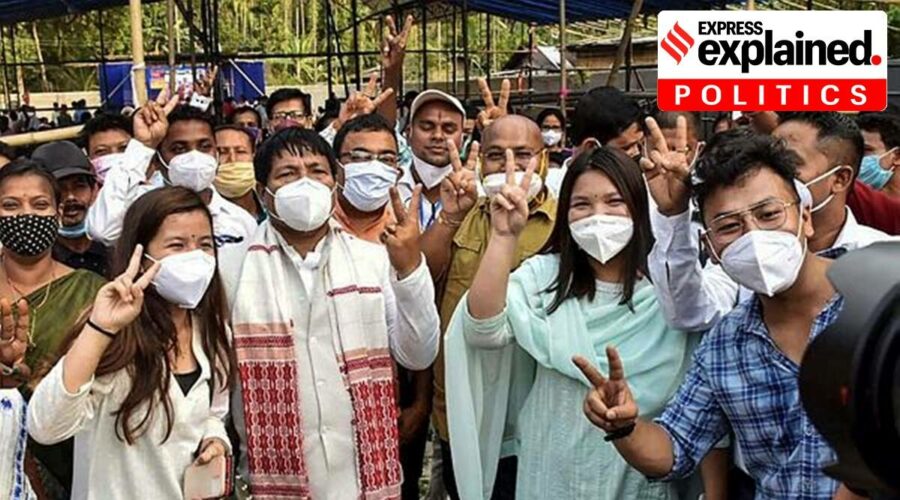 Congress says AJP and Raijor Dal split anti-CAA votes in a number of seats. How many votes did the two parties win. Could an alliance with Congress have been decisive? A look at what the numbers show. The Assam election verdict indicated a straight fight, with the BJP-led alliance winning 75 seats to the Congress-led alliance’s 50 in an Assembly of 126, but there was a third player whose influence on the result has come sharply into focus.

The Assam Jatiya Parishad (AJP) and the Raijor Dal (RD), both born out of the protests against the Citizenship Amendment Act (CAA), has ended up with one winning candidate between them: the jailed peasant leader Akhil Gogoi who heads the RD. But the Congress says the two parties decisively split the anti-CAA vote, especially in Upper Assam, and refers to statements attributed to BJP leader Himanta Biswa Sarma that he had deliberately propped up the two parties with this very aim.

The JD has since held a press conference and the RD issue a press release, both denying that they contested to help the BJP win.

After the AJP and the RD were formed earlier this year, the Congress sent repeated feelers for a joint fight against the BJP on an anti-CAA platform. The two parties allied between themselves but ignored the Congress, which fought the polls in alliance with the AIUDF.

“We kept our doors open for all who were against CAA till the last minute. We believed that those who were agitating against CAA and addressing gatherings in the whole of Assam to vote against those who brought CAA in Assam would join forces with us. But when they did not join us we were aware that they would act as spoilers,” said Bobbeeta Sharma, chairperson of the state Congress’s media department.

What the numbers show

For working out how well a hypothetical alliance might have performed, the commonly followed procedure is to add up their respective votes and see if the total would have defeated the actual winner. This has its limitations: it works on the assumption that all the voters of the individual parties would have made the same choice if these parties were in alliance. Therefore, this is only a comparison of totals in view of the allegations. 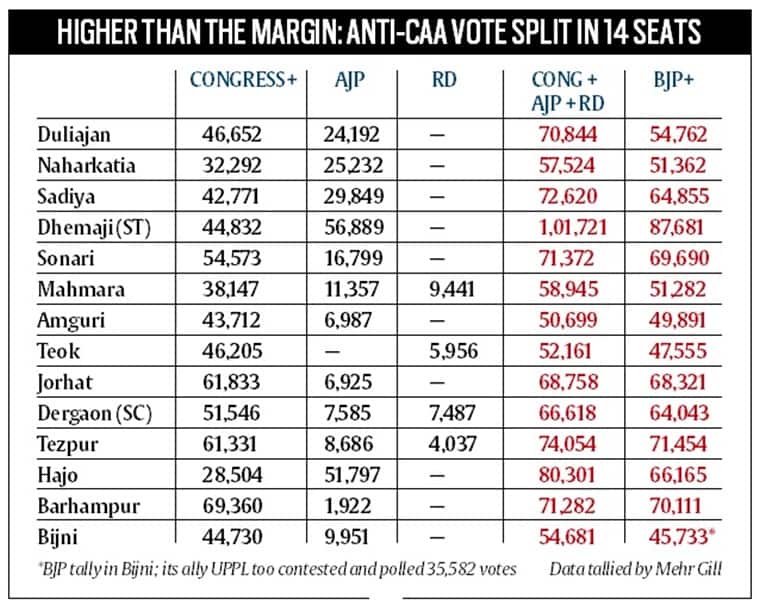 How significant is this? Had the Congress and its allies won all the 14 seats listed in the table, and had they been able to count Akhil Gogoi’s seat in a hypothetical alliance, their total would have been 65, just above the majority mark of 64.

Of the 14 seats, 11 are in Upper Assam, which identifies deeply with Assamese nationalism and saw some of the strongest protests against the CAA last year. And two of these 11 contests featured AJP founder president Lurinjyoti Gogoi. In Duliajan, he polled 24,000 votes, 3 times the BJP’s winning margin of 8,000 against Congress. In Naharkatiya, he polled 25,000, well over the BJP’s winning margin of 19,000.

“It is not that they (AJP-RD) are the only reason the Congress-led Mahajot could not form the government. But they were one of the causes,” said Congress spokesperson Rituporno Konwar.

How it blew up

On April 1, when Assam voted in the second of three phases, veteran TV journalist Atanu Bhuyan tweeted: “New parties were formed as per our plan to divide anti-CAA votes: @himantabiswa in exclusive interview to DY365.” The interview is likely not online, Bhuyan told The Indian Express when asked for a link, but reiterated this was indeed what Himanta Biswa Sarma had said.

Sarma, Health Minister in the outgoing government and a contender for Chief Minister in the next, said he has been refraining from making political comments at a time when Covid-19 has been causing deaths. “Let us analyse the Assam elections after a few days,” he said.

The Congress is now holding up the interview as evidence against the AJP and Raijor Dal. “When Himanta Biswa Sarma himself said that BJP deliberately propped them up to divide anti-CAA votes, it raises the question on the basic integrity and honesty of those parties who went with one agenda to the people of Assam and clandestinely helped BJP to win — the very forces that they were claiming to fight against in the interest of Assam,” Bobbeeta Sharma said.

“We contested to achieve our own fixed target, and it was neither to help other parties nor to harm others,” said AJP spokesperson Ziaur Rahman. Lurinjytoti Gogoi said the reason the Congress lost was because it sought to counter the BJP’s communal politics with its own brand of communal politics by allying with the BJP.

For the RD, publicity secretary Devanga Saurabh Gogoi said the RD had contested only 38 seats and the Congress-led alliance could have won itself a majority out of the other 88 seats. He cited a number of seats that the RD chose not to contest to prevent a split of the anti-BJP vote. These including Mariani, whch Akhil Gogoi eventually decided not to contest, and which the Congress won.