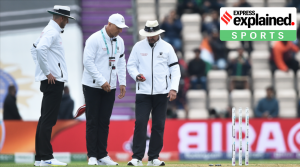 To start with, the ICC has ruled out the possibility of making the final a three-Test series due to time constraints. The governing body of world cricket has also defended its decision to have the final in England. A WET Southampton has given rise to a couple of questions; whether the International Cricket Council (ICC) was right in picking England as the World Test Championship (WTC) final host, and should the final from the next cycle onwards be a three-Test affair?

To start with, the ICC has ruled out the possibility of making the final a three-Test series due to time constraints. The governing body of world cricket has also defended its decision to have the final in England.

When the ICC launched the WTC two years ago, its Board members unanimously agreed to have the final in England.

It was basically down to two reasons; a June final fell within peak English cricket season and away from England, options were very limited.

“It pains me to say it, but a ONE OFF & incredibly important cricket game should NOT be played in the UK,” former England captain Kevin Pietersen tweeted on Monday, adding: “If it was up to me, Dubai would always host a one off match like this WTC game. Neutral venue, fabulous stadium, guaranteed weather, excellent training facilities and a travel hub! Oh, and ICC home is next to the stadium.”

Sounds fine, just that Dubai’s heat during this time of the year would have been unbearable for the players. Mercury is hovering over 40 degrees Celsius in Dubai at the moment, and a day game over five days in that condition was practically not possible. As far as India is concerned, even without a devastating second wave of the pandemic, peak monsoon is not a cricket season in this part of the world, while these are winter months in the Southern Hemisphere.

England, on the other hand, is well into its traditional cricket season. New Zealand played a two-Test series in England ahead of the WTC final.

Why Southampton instead of Lord’s?

The WTC final was originally scheduled to be played at Lord’s but certain factors forced its switch to Rose Bowl in Southampton. It is learnt that the ICC took the decision in January to ensure that the game is staged safely against a Covid backdrop. Back in January, the United Kingdom (UK) was in complete lockdown.

Southampton’s on-site facilities, including the team hotel, ensured a tighter bio-secure environment. Both India and New Zealand have had all the training facilities inside the bubble, while India also got the nursery ground for their intra-team matches.

Given the quarantine rules in UK, was there an alternative?

No. As the Covid situation got worse in India, the UK government placed the country on a red list, which meant that the Indian squad had to serve a 10-day quarantine, with just 20 minutes of exercise per day, upon reaching England. It is learnt that the ICC negotiated with the UK government to give the on-site hotel ‘Managed Quarantine Status’, which allowed the Indian team to serve their quarantine at the venue and train in a completely bio-secure environment. It wouldn’t have been possible if the final were at Lord’s.

Is Southampton one of the wettest places in England?

Far from it. In fact, the south coast, the home of the Hampshire County Cricket Club, is the driest place in the country. Data from climate-data.org shows that Southampton usually has 2.3 inches of rain in the month of June compared to London’s 2.4 inches. According to an ICC insider, the wet weather at Southampton is down to pure bad luck, as this is the first time in 10 years that two days of a Test in England have been lost to bad weather.

Why has the ICC ruled out a three-Test WTC final?

There’s a school of thought that the WTC final should be a three-Test series to have a fair assessment of the two finalists. “In the long run, a best-of-three final will be ideal as a culmination of two-and-a-half years of cricket around the globe. But we have to finish it as quickly as possible because of the FTP that will start all over again,” Indian team head coach Ravi Shastri had said. Then again, a cramped Future Tours Programme (FTP) doesn’t give the ICC the leeway to make the WTC final a three-game affair. “There’s simply no space for a three-Test affair… That’s a month minimum out of the calendar (for all teams),” an ICC spokesperson told The Indian Express.

Four WTC finals are to be played during the 2024-2031 cycle and all of them will be one-off games.

06/23/2021 India Comments Off on Explained: Was England a poor choice for WTC final?
India