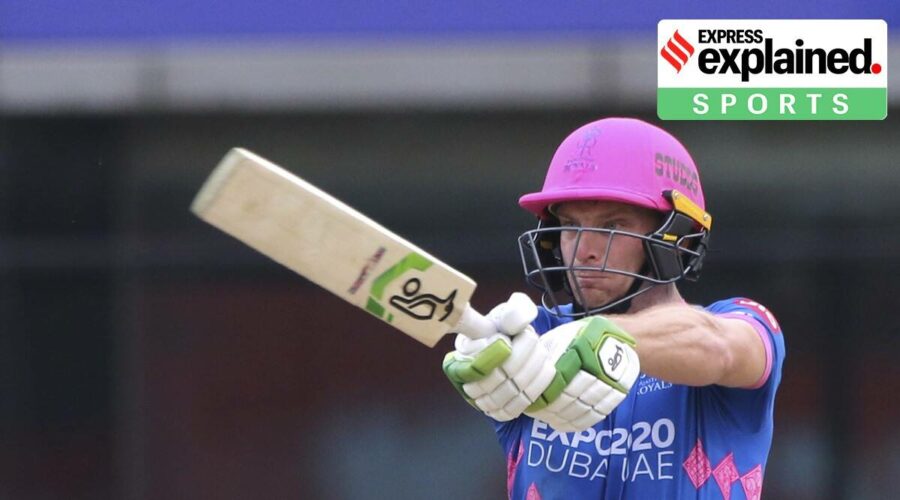 What are Jos Buttler’s favourite six-hitting shots? What role does stance play in Buttler’s batting? Jos Buttler might not be as prolific a six-hitter in T20s as Chris Gayle or Kieron Pollard. The Englishman strikes one every 16th ball, as opposed to the Caribbean six virtuosos who pummel every ninth delivery over the rope. Buttler’s rate, though, is better than both David Warner (19 balls) and Rohit Sharma (17 balls), two modern-age white-ball mavericks. Few though hit the sixes as flat or ferociously as Buttler, as the eight sixes he struck en route his 124 against Sunrisers Hyderabad on Sunday would testify.

Where does he hit his sixes?

Buttler could smite sixes anywhere and everywhere, but there is a clear preference for the arc between long-on and mid-wicket. Of the 13 sixes he has struck in IPL-2021 so far, eight were fetched on the leg-side and three over extra cover. In a sense, his set-up is predisposed to flay sixes through the leg-side than straight or over long-off. It’s because he is predominantly a bottom-handed player, who breaks the wrists and closes the bat face slightly at the point of contact and looks to whip the ball with his wrists. In a batting session with Andrew Flintoff and Robert Key in Sky Sports batting masterclass, Buttler explains the rationale: “It’s my natural swing, maybe because I’m predominantly a right-sided person with a strong bottom hand. Some of the coaches tried to change the method, but I stuck to my natural game.”

The tendency to close the bat face early has sometimes troubled him, especially in red-ball cricket and when the ball is swinging, but in white-ball formats, it has helped generate a fluid swing of the blade and tremendous power. Another favourite area is the extra-cover region, through which he sometimes drives the ball violently or wafts it like a forehand in tennis (like a southpaw’s double-handed backhand). Sunrisers bowler Sandeep Sharma would vouch for the incredulity of the stroke.

What are Buttler’s favourite six-hitting shots?

The thump over long-on is his staple six-hitting shot. He likens it to a slap shot in hockey, when the wrists are twirled at the last moment. His wrists might not seem as malleable as those of batsmen from the Orient, but nonetheless are strong and he puts it as the reason behind his quick hands. “Wrists are the most important part of my batting,” he had once said.

When playing the slap-shot like in hockey, Buttler holds his wrists over the grip and looks to give an almighty whip with the bottom hand. The right wrist takes over from the left elbow and thereby generates bat speed. He also moves his hands down the handle — a shortened grip makes for greater accuracy. “I don’t look to use much of my body to hit the sixes, but primarily my bottom hand,” he told Flintoff in that batting masterclass.

Flintoff’s method though is the classic English approach, wherein the wrists are locked when driving so that he meets the ball with a fuller face of the blade. The success rate of the stroke depends on timing rather than power. Buttler offers a more closed face.

His favourite, though, is the thud over the extra-cover region off mostly full or yorker-length balls. Again, Sharma would testify. When he decides to play this stroke after judging the length, Buttler goes deeper into the crease to manufacture some length, opens the bat face, the hands get lower and he opens up the body further so that he could get underneath the ball and murder it. To get the requisite elevation, the hands have to come from a low angle. Interestingly, through almost the same area, he could employ those ferocious forehand-slaps like in tennis (he has played a lot of that too, and credits his wristiness to the sport).

Buttler rises with the ball, sometimes both feet in the air, and depending on whether he wants to hit through the ground or in the air, gets under the bounce or rides it. It’s those powerful wrists that impart impetus to the stroke. When playing both these strokes, his aim is to skim the ball hard and flat rather than hit high and handsome. Research in baseball has postulated that the optimum angle for achieving the greatest distance is 30 to 35 degrees above the eye-line.

What role does stance play in Buttler’s batting?

In his pre-delivery trigger, Buttler’s back foot goes back before the front leg moves forward a bit. He loads up and then comes back at the ball like it’s in baseball. “Moving back, then forward helps me get momentum into my shots. It’s like a baseball technique. I could stay where I am, but going back feels like it gives me a bit more drive to come back into the ball and get all my weight and momentum going back to the target of where I want the ball to go,” he has explained as the reason behind his trigger movement.

Besides, he can then use the power of his legs to spring forward from this position and launch the ball over the in-field. He has, in the past, tried a more conventional approach of thrusting on to the front foot, but that only resulted in him pushing at the ball.

Buttler’s stance is a bit open and he’s almost lined up to mid-on. He says the posture allows his head to be in a good position. As he’s predominantly right-eyed, he keeps the off-stump at the non-striker’s end as a marker of sorts when bracing for the delivery.

05/03/2021 India Comments Off on Explained: The secret behind Jos Buttler’s six-hitting prowess
India