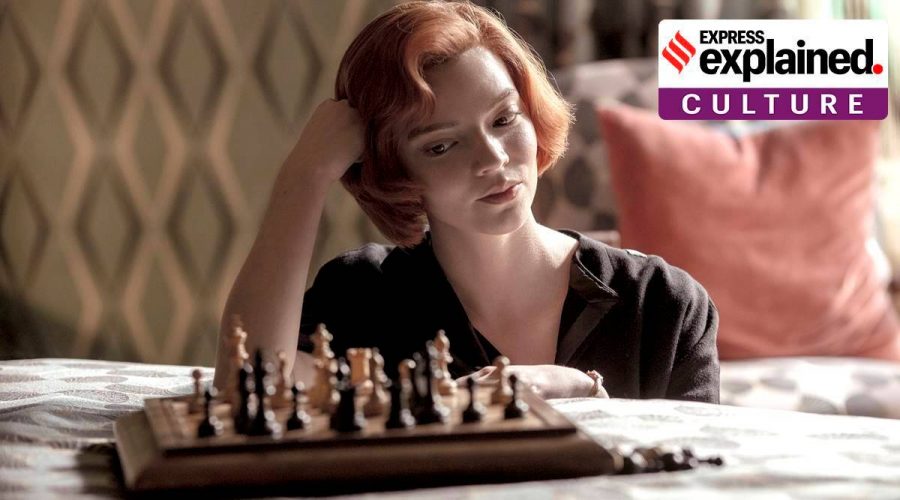 Hailed as “one of the best shows of 2020” and a “surprise hit” of the season, The Queen's Gambit has found critical acclaim, especially in the chess community, which has lauded the games in the show to be "well choreographed and realistic". 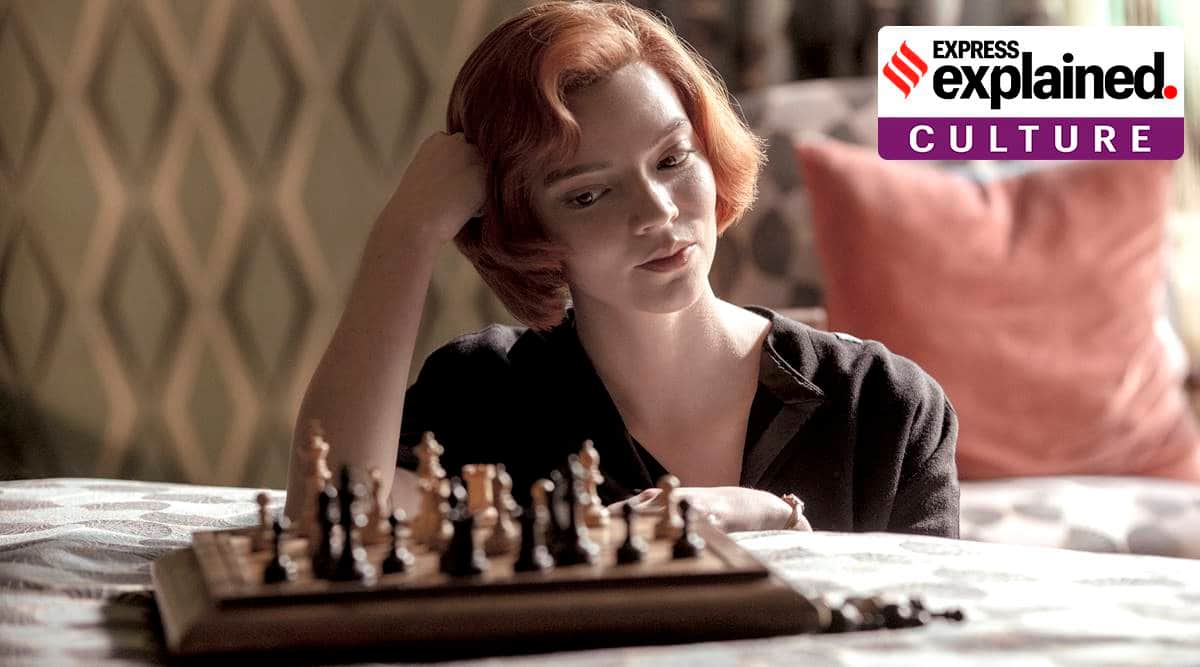 It may soon be hard to buy a chess set in the United States, thanks to The Queen’s Gambit, the American mini-series on Netflix being credited for the sudden surge in popularity for the game. Starring actor Anya Taylor-Joy, the show is based on Walter Tevis’s 1983 novel of the same name. Set in the 50s and 60s during the Cold War, it follows the story of an orphan chess prodigy, Beth Harmon, who enters the male-dominated world of competitive chess with a quest to become the world’s greatest player, also while struggling emotionally, with drug and alcohol dependency.

The novel was highly praised at the time for the technical accuracy of its depictions of chess. It occupied a space between a thriller, sports/game novel, and a bildungsroman. Created by Scott Frank and Allan Scott, the adaptation released on October 23 with rave reviews. (Read our review)

Hailed as “one of the best shows of 2020” and a “surprise hit” of the season, it has found critical acclaim, especially in the chess community, which has lauded the games in the show to be “well choreographed and realistic” which “convey the emotion of chess really well”. The series is said to be the most watched TV show globally and ranks first in 27 countries, including the US, UK and Russia — which is unusual for a show revolving around chess.

Origin of the game

The origin of chess, however, still remains a matter of controversy. Many historians say it was born out of the Indian game of chaturanga in the 6th century, and gradually transformed into shatranj. It spread throughout Asia and Europe over the coming centuries, and eventually evolved into what we know as chess in the 16th century. As it gained popularity throughout the world, chess sets were standardised in the mid 19th century, and chess clocks were also introduced for competitive play as otherwise a single came could last up to 14 hours.

What are openings in chess?

While watching the show, one regularly learns about different chess openings. The Queen’s Gambit itself is the name of a popular opening. The Sicilian Defense is another one in which Harmon is an expert. An opening simply refers to the initial moves in a game of chess. The Oxford Companion to Chess lists 1,327 named openings and its variants. Apart from specific move sequences, the first phase of the game is also called the opening, while the other phases are the middlegame and the endgame. Professional chess players spend years studying openings, and continue doing so throughout their careers, as the opening theory continues to evolve.

How popular was chess in the Soviet Union?

There is a scene in the show where Harmon, who is US champion, strolls around an ordinary Moscow park, while dozens of elderly men huddle around their chess boards, plotting their next moves. It aptly signifies how obsessed the Soviets were with the board game. The wave swept over the country in the aftermath of the 1917 Russian Revolution, and the game could be found in every household. Previously reserved only for the elites, spreading it to the masses became one of the ways the communists sought to abolish elitism. Vladimir Lenin’s supreme commander of the Soviet army, Nikolay Krylenko, called it a “political weapon” and laid the foundations for state-sponsored chess through chess schools and tournaments.

📣 Express Explained is now on Telegram

Six years after the first state-sponsored chess tournament was held in Moscow in 1921, chess prodigy Alexander Alekhine became the first Russian to win a world tournament. For every Soviet citizen, world title meets were edge-of-the-seat events. In 1948, world champion Mikhail Botvinnik kicked off an era of Soviet domination in the world of chess, and reached its peak during the Cold War.

During the Cold War

The title of the world champion in chess was one of the many battlefields during the Cold War, a theme that hangs in the background in The Queen’s Gambit. The popularity of chess could best be indicated by the 1972 PBS broadcast of Bobby Fischer and Boris Spassky games, which is still the most popular television chess show in history. Their matches between 1960 and 1972 were framed by the war, and captivated the entire world, even among people who knew nothing about chess. Fischer, one of the most enigmatic chess figures of all time, was and the only player able to break down the Soviet chess wall in the second half of the 20th century. This win is said to have provided an inspiration for Tevis to write the novel.

Diminishing popularity in the US

The popularity of the game diminished over time. This could be ascertained through the decrease in the number of articles about chess in New York Times. From 241 articles in 1972, it reduced to 148 in 1995, the year when Russian grandmaster Garry Kasparov squared off against Indian grandmaster Viswanathan Anand on the 107th floor of New York’s World Trade Center. This number fell further to 28 in 2011, the year when Hikaru Nakamura, an American grandmaster, won the Tata Steel Chess Tournament, one of Europe’s most recognised events. Chess players and experts quote two possible reasons for America’s abandonment for the game: absence of interesting stories and charismatic players in the past few years, and FIDE’s political and financial problems.

The pandemic contributed to the rise in popularity of the game, thanks to the chess streamers on Twitch and YouTube, who have turned it into a viewable sport, and its geniuses into online sensations, including grandmaster Daniel Naroditsky and Nakamura. Chess.com, which has been getting three times as many new members as usual in the last few months, is seeing the downloads for its app skyrocket in the US since The Queen’s Gambit debuted last month. Among strategy games on the iPhone, the app has jumped to No 3 in the US and No 2 in the UK. Sales of chess sets are through the roof in the US. Goliath Games, which sells six kinds of chess sets in the country, is witnessing an increase in sales by 1,048 percent. Toy companies are calling it the sales “unprecedented”. E-commerce giant eBay has registered a 270 percent increase in demand for chess sets and accessory sales, since the show’s release on Netflix, with people looking for wooden chess sets nine times more than plastic, electronic or glass ones.

Cinema and popular culture have time and again captured the intensity and charm of the game. Some of the most iconic and popular scenes include cinema great Ingmar Bergmann’s 1957 film, The Seventh Seal, where he tells the tale of Antonius Block, a knight returning from the Crusades, who challenges the Grim Reaper to a game of chess with his life depending on the outcome. While in India, the story of chess and cinema instinctively leads us to Satyajit Ray’s lone Urdu outing, Shatranj Ke Khiladi, an adaptation of Munshi Premchand’s tale of two aristocrats Mirza Sajjad Ali and Mir Raushan Ali, who are obsessed with the game while the British annexe Nawab Wajid Ali Shah’s Awadh in the background. Then there was Star Trek, which introduced one of the most popular chess variants, the 3D chess.

One cannot forget the wizard chess in Harry Potter, which made an early appearance in the first book, The Sorcerer’s Stone. Winning in wizard chess on a giant chessboard is one of the key tasks in the labyrinth that leads to the stone. Stanley Kubrick’s 2001: A Space Odyssey has a famous scene, showing the first chess game between a human and a machine. The Simpsons also pays an ode by introducing Homer Simpson as a “chess savant” and featuring the World Champion Magnus Carlsen as a guest. While The Pawn Sacrifice follows the life and games of Bobby Fischer, In Searching for Bobby Fischer, we meet a young chess prodigy, Josh Waitzkin, who is on his path towards becoming a chess champion. Following a similar storyline, The Queen’s Gambit is the latest entrant to this chess club.