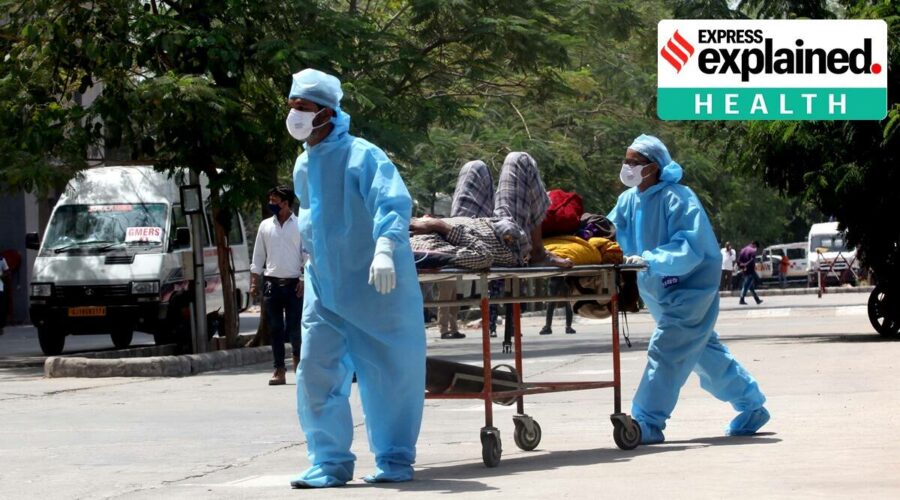 Gujarat is facing a second wave of Covid-19 infections, and the state government has announced night curfew in 20 cities and towns till April 20. Is the situation a cause for worry? 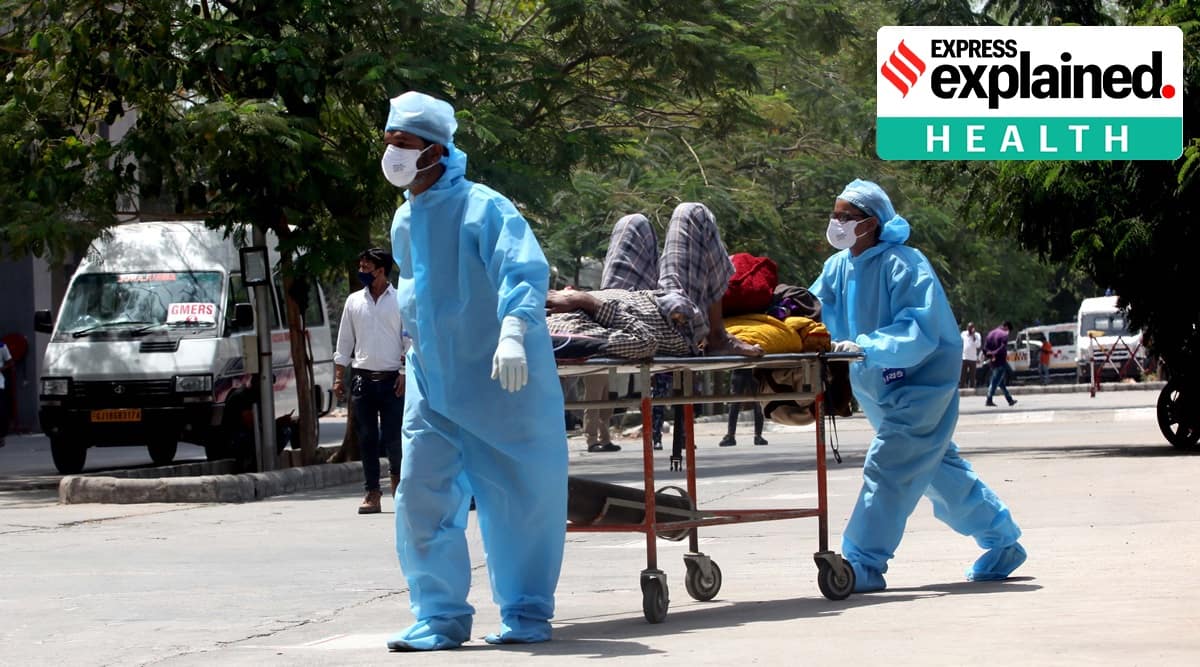 Over the last two weeks, Gujarat has been reporting an unusually high number of Covid-19 cases. On April 7, the state reported 3,575 cases, its highest so far and almost double the infections it detected weeks earlier on March 20, when it reported 1,565 cases. Its April 7 figure is also six times the cases that were reported a month ago, in the first week of March.

Taking suo motu cognizance of the situation, the Gujarat High Court on Tuesday proposed imposing a lockdown for three to four days to control the spread of the virus. In response to this, the state government announced night curfew in 20 cities and towns till April 20.

The second wave of Covid-19 in Gujarat

While Gujarat saw a spike in cases since March beginning, it was only on March 17 that the daily cases crossed 1,000. In less than 10 days, the state started reporting over 2,000 cases every day, and, on April 5, over 3,100 new cases of were reported across the state.

In the last one week, the number of new infections has grown by an average of nearly one per cent every day. Is the Covid-19 situation in Gujarat worrying?

The medical fraternity in the state has observed that the second wave of Covid-19 has seen a rapid spread of the infection, and unlike before, entire families are being infected. They attribute this to several factors, including the mutations of the virus.

The latest surge also appears to be affecting a younger population. A community medicine expert said, “Recent data analysis in Gujarat has shown mortality in those less than 50 years without any comorbidities because of thrombotic (blood clotting) changes, which earlier we would see in older people with comorbidities.” Pulmonary involvement without symptoms has also been seen.

Several private practitioners in Ahmedabad have also raised an alarm on increasing pediatric and neonatal (infant less than four weeks) patients this time. While on the severity spectrum elders continue to dominate, an uptick has been seen among younger patients, especially those below the age of 40.

Meanwhile, while hospitalisation has not seen a significant variance in Ahmedabad, with an average of seven days of hospitalisation in mild to moderate cases and up to 15 days in severe cases, hospital beds are fast running out across the state, and especially in the four worst-hit cities of Ahmedabad, Vadodara, Surat and Rajkot.

Rajkot city, where there are 1,969 beds in government and private facilities, has a vacancy of 23 per cent.

In Vadodara, 6,300 of the city’s 8,833 beds are occupies — around 25 per cent vacancy. This also includes patients suspected of having Covid-19, and those awaiting discharge. The Vadodara Municipal Commission (VMP) issued a notification on April 3 laying down Standard Operative Procedures (SOPs) for empanelled hospitals, after it emerged that several beds were occupied by patients awaiting insurance claim approvals. VMC made it mandatory for insurance companies to clear cashless claims 12 hours ahead of the discharge of the Covid-19 patients, as well as consider claims of those who tested negative on RT-PCR but had other laboratory tests indicating viral etiology.

The Medical Officer for Health, VMC, told The Indian Express, “We have observed that a lot of patients this time are testing negative on RT-PCR, but the clinical signs of Covid-19 are present. We are thus relying on the findings of other laboratory and radiology investigations to ascertain the viral etiology, and they are being treated as per protocol.”

What about Gujarat’s vaccination drive?

In the week between March 13 and 19, over nine lakh doses were administered across the state. In the following week, the vaccination drive was ramped up, with over 15 lakh doses administered till March 26, and 16.77 lakh doses in the subsequent week, till April 2.

The last few days, however, has seen a slowdown as several districts have stalled vaccination due to a shortage of vaccines. In fact, on April 7, only 1.19 lakh doses were administered, a significant decrease. What is the way forward?

The medical fraternity in the state has opined that vaccination should be opened up for everyone above 18 years, as all age groups are getting infected and there is unpredictability in the outcome of cases.

A government hospital doctor pointed out, “A majority of the working population are those below 45 years of age, and a large chunk of them cannot afford to miss work, putting them in a dangerous situation. It is important to vaccinate them all.”

Dr Rashmi Sharma, Associate Professor of Community Medicine Department at Gujarat Medical Education and Research Society (GMERS) Sola in Ahmedabad, also warns that the greater the spread of infection, the greater the opportunity to mutate, leading to new variants.

Dr Atul Patel, an infectious disease specialist in Ahmedabad, and Dr Pranay Shah, Dean at BJ Medical College and a microbiology professor, also suggested that the immune response, in particular T-cell immunity, should be studied to better understand the impact of vaccines on the body and in the context of the evolving variants to understand cases of reinfections.

“Ideally, every state should have a research laboratory to study this and answer these questions, but we don’t. We have also been discussing this in the state immunisation task force, but we don’t have answers to these. For instance, if we vaccinate 100 people and we find 60 people develop T-cell immunity, it is reassuring. But there is no such study,” Dr Patel said.

While there is lack of concrete evidence of whether the latest surge is due to newer variants, infectious disease and community medicine experts have called for a “systematic study” on the secondary attack rate of the present infections as well as “rapid genome sequencing”, with some even suggesting geographical categorisation of prevalence.

Dr Joshi suggested a ‘cocoon vaccination strategy’, where those around ineligible candidates — like children, pregnant and lactating women, are vaccinated.

Experts in Gujarat have emphasised that “any unusual symptom should be taken as high index of suspicion for Covid-19”, and a doctor must be consulted.

Dr Rashmi Sharma said, “Earlier respiratory symptoms were predominant, but now there are changes with gastrointestinal symptoms, eye symptoms like conjunctivitis, and weakness. Nothing should be ignored as early diagnosis and treatment can change the outcome of disease.”

The Surat Municipal Corporation (SMC) has warned of new symptoms for Covid-19, which are being observed during the second wave of infections. These symptoms include abdominal pain and diarrhoea, high-grade fever, and weakness.

Doctors have also warned that in some cases, usual symptoms of fever and dry cough may be absent, which was otherwise considered the first signs of Covid-19.

SMC has also notified that a faster transmission rate has been observed as well as a faster bodily response wherein the virus is affecting the lungs sooner, leading to the set-in of pneumonia in a matter of couple of days, which would otherwise take six to seven days to set-in.

Joint pain, weakness and a loss of appetite can also be indicative of pneumonia, caused by C0vid-19, highlights an SMC advisory.

— With inputs from Aditi Raja in Vadodara

04/08/2021 India Comments Off on Explained: The Covid-19 situation in Gujarat and its vaccination drive
TV & Movies