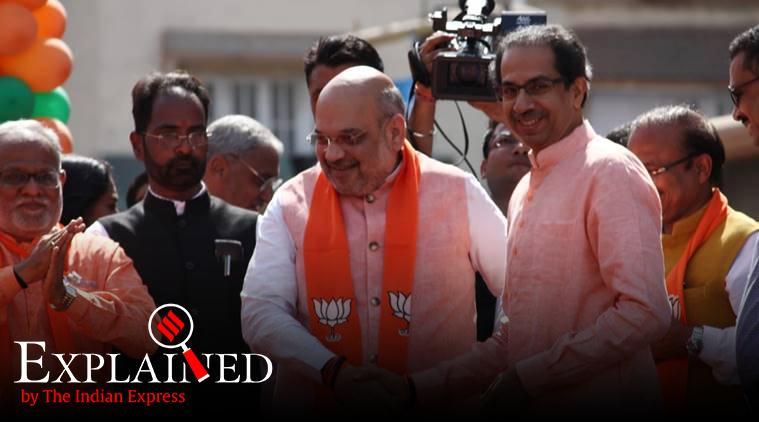 Chief Minister Devendra Fadnavis had told The Indian Express in an interview last month that "there should be no doubt" that he is "coming back as Chief Minister", and BJP president and Home Minister Amit Shah has announced that Fadnavis "deserves another term to take development work ahead". As the countdown to the Maharashtra Assembly elections begins, the familiar jousting for seats among the BJP and Shiv Sena is back. While a similar tug-of-war in the saffron alliance had been seen before the 2014 elections too, the Sena is more aggressive this year. The reason: The Shiv Sena would like to have as Chief Minister Aaditya Thackeray, the son of party chief Uddhav Thackeray. The BJP, on the other hand, doesn’t want to play second fiddle to the Sena. Chief Minister Devendra Fadnavis had told The Indian Express in an interview last month that “there should be no doubt” that he is “coming back as Chief Minister”, and BJP president and Home Minister Amit Shah has announced that Fadnavis “deserves another term to take development work ahead”.

The question of seats

The parties are apparently in the final stage of seat-sharing talks. The Sena has rejected the BJP’s initial offer of 110 seats, and has been pushing for at least 144, or half the total 288 seats in the Assembly. It wants the BJP to accommodate friendly parties in its share of seats. In the 2014 Assembly elections, which the parties fought separately, the BJP had won 122 seats, and the Sena 63. This time, the BJP is looking to contest more than 150 seats.

Ahead of the Lok Sabha elections, with the prospects of an alliance looking bleak, Amit Shah had met Uddhav at Matoshree, the Thackeray family home in Kalanagar, Mumbai. Details of the deal were not made public, but it is understood that the two leaders agreed to share seats equally in the Assembly elections.

However, with a massive Lok Sabha mandate behind it, the BJP now appears to be singing a different tune. The party is believed to have cited the changed scenario, and argued that it is the more popular party in both the Centre and the state. The BJP-Sena swept 41 of the 48 seats in the Lok Sabha elections, with the BJP winning 23 and the Sena 18.

Each party in the saffron camp would like to win more seats than the other to be able to stake claim to CMship; both are, therefore, working to win over MLAs and popular leaders from the Congress and NCP to their ranks.

More than 10 sitting MLAs, former MLAs, and leaders from the Congress and NCP have already switched to one or the other of the parties. There is greater stress on “importing” leaders for seats at which the saffron aspirants are weak, or which are currently held by the Congress or NCP. Families of long-time Congress loyalist too, are targets for poaching.

Prominent among those who have crossed over are Balasaheb Vikhe-Patil, Abdul Sattar, Harshavardhan Patil, Ganesh Naik, Ranajagjit Singh, Dhananjay Mahadik, Dilip Mane, and Dilip Sopal. The BJP claims more are on the way, and that the party is “in touch” with at least 70 Congress and NCP leaders.

On Monday, the Shiv Sena started to interview aspirants for all 288 seats, signalling that it would be ready to go it alone in case the deal with the BJP does not work out. In July, Aaditya had gone on a 4,000-km Jan Ashirwad Yatra to thank people who had voted for the Sena in the Lok Sabha elections, and to establish direct communication with the electorate.

Aaditya is likely to contest the Worli seat in Mumbai. If he does, he will be the first Thackeray to contest a direct election. Soon after Aaditya’s rally was announced, BJP said Fadnavis would hold a Maha Janadesh Yatra to highlight the achievements of his government and to seek a renewed mandate.